Sport and the Forest are intrinsically linked.

The official declared purpose for a forest after all was for hunting the beasts of the chase.

Alongside this kingly pursuit, lords and landowners often enjoyed the privilege to hunt the beasts of the warren- including wild cats, squirrel, hare and fox (more on the right to Free Warren soon).

Especially popular with the upper classes was hunting with the hawk, and an entire courtly etiquette built up around this sport with certain birds being limited in their use to only certain levels of society (more soon).

These sports left their mark on Medieval Sherwood Forest through the presence of the great royal deer parks of Clipstone, Bestwood and the Castle Park.

Also through such landscape features as the ‘King’s stands’: areas where the king would wait and shoot arrows from, when deer were driven past.

A site near Gleadthorpe in the north of the forest was known as ‘Kyngges Trist’ in the early 15th century (Belvoir map).

As well as these forest sports there were many common medieval sports played by everyday people in the English countryside.

Archery was the mot popular sport- especially from the 14th century when Edward III demanded practice from his subjects at the town butts (see archery in the forest entry).

This sport was even more popular following the banning of many others in its favour...

One of these was described as ‘abominable… more common, undignified and worthless than any other game, rarely ending but with some loss, accident or disadvantage to the players themselves’ (Coulton 1940).

It was played by teams sometimes numbering hundreds on pitches sometimes miles long. It would be easy to see games being played on the wide expanses of the heaths and commons of the forest, with people falling into gorse bushes and rolling in the heather and brambles.

Football was played in Nottingham in the Medieval period (Foulds in Beckett 2006), and luckily there were 'bonesetters' in the town to deal with the casualties!

It survives in this form in the Shrove Tuesday matches played in nearby Ashbourne.

Ian Mortimer in his Time travellers guide to the 14th century (2008) suggests that the only rules associated with football at the time were those banning it!

This blood thirsty and violent sport was repeatedly banned in the 14th century.

It seems a surprise that football was considered so barbarous, when it is viewed alongside some of the other popular sports of the day.

Bear and bull bating were immensely popular along with dog fights and cock fighting. A bear may have been kept in Nottingham, as John Draper held the position of Bearward in 1433 (Foulds, in Beckett 2006). There is also a Bearward Street recorded on the 1610 map of Nottingham by John Speed.

All are shocking to us now- but it was different age.

The 1609 crown survey map of Sherwood Forest shows a circular cock pit for crowds to watch cock-fighting matches- a specially built stage with one circle for the contest and a viewing circle surrounding it.

This suggests official backing as such a site could hardly be deemed an underground venue, located as it was on the Kings own manor of Arnold. Interestingly it is now under a modern day a golf course… 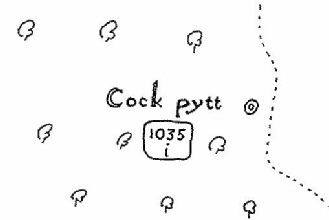 Picture: Exerpt from the 1609 Crown Survey of Sherwood Forest by Richard bankes. (Mastoris and Groves 1998).

The Major Oak in the Sherwood Forest National Nature Reserve (believed to be 1,000 years old and the hideaway of Robin Hood) was itself at one time known as the 'Cock-Pen Tree', because wodcocks were reputedly stored within its mighty trunk.

The poem about the hero Gamelyn dating from the 14th century tells of a wrestling match- which the hero wins- where the traditional prize is a Ram. Wrestling too was a popular sport. As were many trials of strength (the most obvious being the tournament- originally embodied by the melee and later by the joust- see the Melee and Jousting: Tournaments in Medieval Sherwood Forest entry for more details).

The Bishop of Rochester suggested wrestling belonged in the same category as glutony, and chatting idly in the market, and anything else that distracted the populace from listening to the sermons' (Mortimer 2008).

Obviously gambling played a major part in contests between animals, and those between people. As well as this people played dice, quoits, cards, and horse racing.

Along side bloodsports, fighting, gambling (and football) people also enjoyed stick and ball games and even 'real tennis'.

According to Mortimer tennis would take place when a net was strung across the street- with extra points for hitting the ball through peoples windows-  needless to say it was not popular with many townsfolk!

In the forest itself the 1609 Crown Survey Map also shows an outdoor bowling alley on the Mount Hooton Escarpment roughly on the line of modern day 'Forest Road' overlooking the Nottingham Lings to the north and Nottingham town to the south. Doubtless bowls was in some way more violent than nowadays too!

The Medieval period was an age of contrasts; and as well as enjoying bouts of extreme violence people listened to plays, songs, music and poems, they loved dancing and they watched acrobats and mummers.

One of the favourite pastimes was listening to ballads of heroes and legends... many of who will be discussed soon including the outlaws Adam Bell, Clim of the Clough, Fulk Fitzwarin, Eustace the Monk, the hero Gamelyn, Hereward the Wake, and of course others including Robin Hood himself.

These heroes and outlaws, and their actions help us to see what fired peoples imaginations. They show us the values of the common man at the time in ways that the laws and etiquettes of the social elite never can.

In the same way the games, sports and pastimes of ordinary people help to give us a glimpse into their lives and concerns.

The actions and day to day lives of the ordinary people in Medieval Sherwood Forest are what help to bring the place back to life.

Medieval sports and pastimes in the Forest