Sherwood Forest was an area of land chosen by the King to be a Royal Forest. A Forest was a designated area - effectively a game reserve, placed under Forest Law.

Forest Law protected the beasts of the chase, giving the king and those with special privileges the exclusive right to hunt within the area.

It was therefore illegal to hunt deer in a Forest without the Kings permission.

It was also illegal to chop down trees for timber. Originally this was to protect the habitat of the deer.

This ‘legal Forest’ had a defined area.

The area was chosen because it contained within it a ‘physical forest’ of woodland, wood-pasture, heath and chase.

Hence the name Sherwood Forest refers to the legal entity.

Sherwood Forests boundary changed over time; dependant on politics - local and national, and the relative strength of the crown and its ability to maintain or even expand the boundaries against the efforts of landowners who wished them to be reduced.

The boundary of Sherwood Forest was perambulated (walked - or ridden on horseback) by officials known as ‘Regarders’.

Some of these perambulations have survived with the earliest perambulation dating to 1218, but other descriptions dating back to circa 1100.

In all of these the boundaries mainly consist of roads and rivers, as these are features which have in general a clear presence, which is fairly permanent, and at least easy to convey to those intending to break the Law.

In all surviving references to the Forests in Nottinghamshire, the southern boundary was the River Trent.

The River Trent passes from west to east, skirting to the south of the medieval town of Nottingham. Nottingham was strategically positioned on a crossing of this river, and grew on a sandstone bluff over-looking its floodplain, about a mile to the north.

It also shows us that rivers are dynamic landscape features, and do not always maintain the same course.

This can be a problem for those who wish to base legal jurisdiction over an area of land, and define it based on the position of that river.

This map shows us that Sherwood Forest extended south all the way to the River Trent.

However at the small village of Shelford it actually crossed the river.

Shelford is a small village lying about 6 miles or 10km, as the crow flies, east of Nottingham on the south side of the River Trent (see the map at the bottom of the page).

At Shelford the boundary actually crossed south of the river Trent to include all of the northern fields of the village.

The boundary here was actually a former channel of the river depicted on the 1609 map as ‘the oulde course of the Trent at Shelforde’. 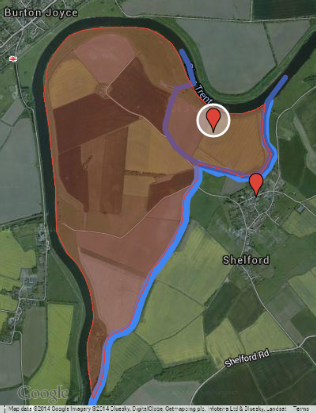 The fact that Sherwood Forest came as far south as the River Trent has been largely forgotten.

The fact that there was actually a part of Sherwood Forest that was south of the current river is almost completely alien to most peoples modern concept of where Sherwood Forest was and is, in the landscape.

For reference, most people today see Sherwood as being the area of ancient oak trees surrounding the Major Oak at the Sherwood Forest National Nature Reserve.

This is 20 miles to the north of Shelford.

Those woods were actually part of the ‘physical forest’ within the ‘legal Forest’ of Sherwood. As were the other areas of woodland on the hills overlooking Shelford across the Trent valley to the north.

The 1609 crown Survey of Sherwood Forest by Richard Bankes was a map and accompanying terrier produced on behalf of the newly crowned King James I (1603-1625), to check on land ownership and assarting (clearing of woodland against the Forest Law) within the Medieval Forest of Sherwood. This was for purposes of taxation (Mastoris and Groves 1998).

It was art of a royal survey of the Forests of England which was designed to help the crown decide which Forests were worth keeping in Royal hands.

It is also relevant today as many of the features can still be seen in the landscape. 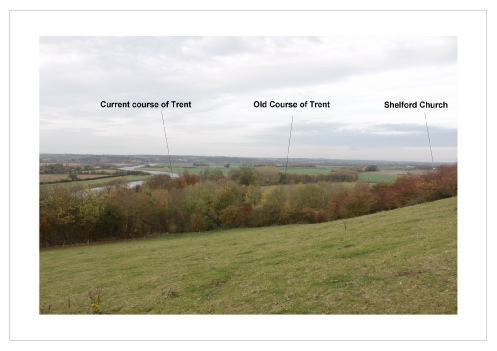 Photograph: The River Trent at Shelford- from Gibbet hill (the site of the village gibbet where criminals were hung in view of Nottingham). Photograph facing north-north-east.

This former route of the river seems to have been an original course according to this map.

But was this an original single channel of the river?

These answers can be found by using landscape archaeology techniques, and through examination of the other surviving sources.

The last perambulation of the boundary of Sherwood Forest from 1664 states:

Interestingly the current course of the river is referred to here as ‘the New Course now of Trent’. The southern channel is described as ‘where of ancient time it were wont to runne through the meadows of Shelforde Towne’.

But what about earlier, can we determine when the two channels formed?

We can look back to the late 16th century, and we see there were two channels then also.

In 1592 these channels would be the cause of a dispute taken all the way to the Star Chamber of Elizabeth I.

This was due to damming of the northern channel with a wier by Sir Thomas Stanhope. He even built locks to allow traffic through the more important northern course through a pound lock he constructed in 1577 between the island of ‘Prier Houlte’ and Shelford. (Salisbury 1982, Revill 1971). These locks are the oldest example known on the Trent.

The southern channel at this point was used for powering mills in the village.

The former island of ‘Prier Houlte’ and the location of the channel for the former pound lock is still visible on the ground.

It would appear then that there were two courses of the river by the 16th century.

So did the course alter dramatically in the medieval period? Perhaps an event of flooding forced an entirely new course to the north? Or was there already a large meander to the north of the southern route?

Mapping evidence both modern and historic suggests the northern course of the river was in existence- and was perhaps the main channel through most of the Medieval period.

All the fields south of the current river channel (the northern course) belong to Shelford, suggesting the northern river course was there when the village was formed- and was a considerably more formidable boundary than the southern course.

The exception is Burton Meadow (see map above- marked with a pin)- the shape of this field suggests it was within a previous looped Meander of the Trent heading south from the northern channel.

Burton Meadow was originally connected to the rest of Burton parish, and this meander must have been cut off at the neck - separating Burton Meadow from the other fields of Burton at some point after the parishes of Burton and Shelford were formed.

This would also suggest that the northern course was there in the early Medieval period.

The shape of this ancient meander around Burton Meadow accounts for the sudden right angle seen in the southern course of the Trent just to the north of Shelford. It was here that it originally joined the northern channel.

Interestingly the medieval perambulations of Henry III and Edward I make no mention of two courses of the Trent.

It seems that wherever the boundary encountered more than one river channel it followed the external channel- extending Forest jurisdiction over the largest area.

A similar situation occurred on the River Leen near Nottingham, where the river also had a number of courses.

The course furthest to the West was the one used as the boundary here.

The old course of the Trent at Shelford then, was not an original,single channel, but one of two courses- and was referred to as ‘old’ in the 16th and 17th centuries as such because it had by then gone out of use. 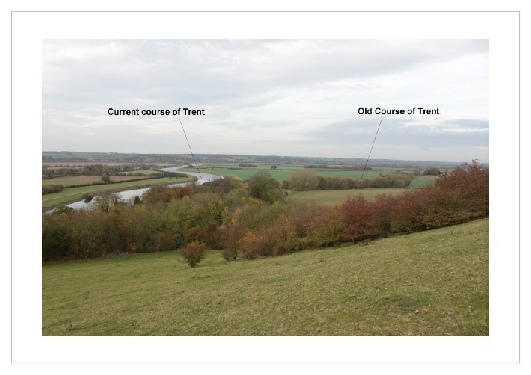 Why not click on the map below and explore the landscape described above.