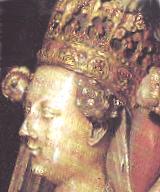 She was born the daughter of Charles II (the bad) of Navarre and Joan of Valois.

Her grandfather was John (the good), King of France (the second King of the house of Valois).

The Hundred Years War which ran from 1337 to 1453, was the dynastic struggle for the throne of France between the English Plantaganet dynasty and the French House of Valois. With both houses claiming the French throne.

Henry IV had seized the throne of England from Richard II in 1399, and married Joan in 1403.

You would think such a link between the royal houses would help to bring about peace- it didnt of course- it never did!

She ruled as Queen of England until her husbands death in 1413.

Her step son Henry V accused and convicted her in 1419 of witchcraft.

Following a four year spell in Pevseney Castle she spent the remainder of her time living in Nottingham Castle.

There she seems to have assumed some of the rights of the Keepership of Sherwood Forest during that time.

Back in the times of Hereditary Keepership, the De Caux and D'Everingham families, based at Laxton Castle, had had a number of rights through their office, which they held from Norman times until 1287 (see Women Keepers of Sherwood Forest entry), when the keepership was lost by Robert Everingham for poaching.

Amongst these right and privileges, was the right of Chiminage - the right to collect taxation from carts travelling through the forest.

A record in the Court rolls for Nottingham from 1431 lists an 'Action by Queen Joan for ferm of Chiminage of Sherwood Forest':

'Joan, Queen of England, by Geoffrey Kneveton, and Robert Clapham her attourneys complains of Thomas Bayle of Nottingham, [of a plea] of debt of 6s 8d'.

She claimed that Thomas Bale took from her the Chiminage of the Forest of Sherwood at the feast of St Martin in the 9th year of Henry V until the same feast a year later- the money should have been repaid by the feast of 'All Hallows' in the 10th year of Henry V, but had not been. This amounted to 6s and 8d...

In fact he refused to pay her it.. and so she brought a claim to the court for the money.

As well as the right of Chiminage, she also seems to have upheld the forest laws regarding the 'hambling of dogs' in the forest (dogs in the forest had to have their claws removed to prevent hunting:

An 'action by Queen Joan for the ferm of the Hambling of Dogs within Sherwood Forest', dated 29 October 1433 was brought before the Nottingham court:

The claim presented that a Thomas Rothewood withheld from Queen Joan and Geoffrey Kneveton the rents from the hambling of dogs within the Forest of Sherwood (pro redditu expeditationis canum infra Forestam de Shyrewode).

It is claimed in the case that Thomas owed 12d for the rent.

Her counterpart in these claims is one Geoffrey Kneveton- who was actually Constable of Nottingham Castle.

The office of Keeper of Sherwood Forest and that of the Constable of Nottingham castle was brought together following the demise of the D'Everingham dynasty's hereditary claim to keepership of the forest (as stated above)...

Perhaps with a member of the royal family also living at the castle alongside the Constable, these roles became blurred, with Queen Joan assuming some of the powers of Keeper of the Forest of Sherwood for herself...

Queen Joan and the keepership of Sherwood Forest