In people’s minds the spiritual and the natural world were intertwined. Evil was all around, and battle had to be done to protect people from malignant forces that surrounded on all sides.

This battle was undertaken by an army of spiritual warriors who prayed and worshiped between them around the clock for the souls of both the living and the dead. 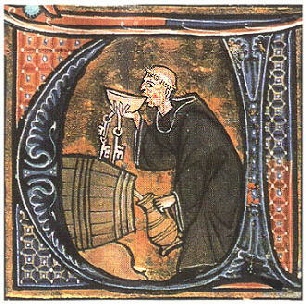 Their abbeys, priories, churches, chantries, perceptories, chapels and roadside shrines dotted the landscape of Medieval Sherwood Forest in the towns and villages, and in the remote areas of the great heaths and woods.

In modern times a life in the cloth is seen as a calling- a spiritual choice based on faith. In medieval times where all the world was religious and had faith, it was a career choice taken by many younger sons of the local gentry; by clerics wishing to rise through the ranks; and by great men of the realm becoming Abbots and Bishops and wielding incredible power and attaining immense wealth.

Many of those who joined the church probably lived quiet lives dutifully tending to their flock and the needs of their parishioners.

But such quiet lives rarely raise enough of an eyebrow to warrant recording... but for every quiet and dutiful man of the cloth there was a ‘priest behaving badly’ to provide us with a rich story of life in medieval times... the religious men of Medieval Sherwood Forest were no different.

The religious houses of Sherwood Forest provide us with many tales of misdemeanour:

Monks were often found wandering away from their houses, such as at Newstead (see Gadding aboutin the Forest entry) and Lenton where in 1350 Prior Peter requested Civil assistance to ‘prevent three apostate monks of Lenton walking abroad in secular dress’ (Marcombe and Hamilton 1998).

Worse still Prior Gilbert de Ponteburgh of Thurgarton Priory just outside the forest was accused of adultery with two local women in 1284, a few months later Alexander de Gedling was in trouble for swearing during a meeting of the chapter and in 1290 Walter de Bingham assaulted a John de Sutton in church and was excommunicated!

At Newstead Priory in Sherwood a Roger of the Cellar and a Geoffrey of the kitchen were dismissed as being a nuisance to the monastery, and evidence suggests drinking and wandering outside the cloister was common...

Vicars, priests and monks were often known felons and members of notorious gangs who committed kidnap and extortion as well as vandalism and robbery.

In Nottingham the Friars of the town provide us with a few incidents of note:

In 1402 the warden of the Franciscans was arrested in Leicester on a charge of sedition and in 1500 warden William Bell was charged with incontinence as a pimp!!  (Marcombe and Hamilton 1998).

It should be noted that the some of the clergy had a bad record of frequenting houses of Ill-repute. In London the Brothels called ‘stews’ in medieval times were controlled by the Bishop of Winchester, where the women were known as the ‘Winchester Geese’.

In Nottingham there was probably a brothel, with a vacant plot of land called ‘Parodyse’ situated in ‘Whore Lane’ in 1391 (Foulds 2006)... subtle...

Maybe the Warden of the Grey Friars was involved somewhere nearby...

In 1398 an action was brought before the borough court of Nottingham against a Chaplain for misbehaviour with a parishioner’s wife:

John de Bilby made a complaint against Roger de Mampton, chaplain on a plea of trespass:

While John was at Ratcliff (Radcliffe-on-Trent) attending his affairs, Roger ‘broke his close and entered his chamber on ‘Brydilsmythgate’’ (Modern Bridlesmith Gate), Nottingham, and ‘was found under a curtain of the bed’.

John warned Roger not to be found by him ‘with his wife, nor in his house in any manner’ again...

Roger promised not to... however:

Apparently Roger the Chaplain and Johns wife damaged two pairs of sheets, a table cloth, towels and one brass pot during their times in the ‘secret places’...

When brought before the court Roger the Chaplain pleaded that he was carrying out his duty ‘as is the custom with the parochial clergy to go through their parish with the holy water’...

He was administering Holy water!

That’s one way of putting it!

Such stories remind us that the medieval world was a colourful place.

They come down to us through the records and enrich our understandings of the lives of the people who reside in those documents.  It is often the bad stories that outshine the good... but we all love gossip, and the medieval records provide plenty of it...

Many lay people’s lives are also recorded and will be discussed soon.

They include forestalling and black-market dealings, robberies, fist-fights, scolds, cuckolds, hangings and banishings...

It is worth remembering that such things will always be found in court records, and should not be taken to reflect the activities of everyone in medieval life. They do however offer us a chance to view a world full of humanity and strife- not to dissimilar to our own...