In the heart of Medieval Sherwood Forest stands an ancient tree named the 'Parliament Oak'.

This tree once stood at over 25 feet in diameter (Dukery Records) and is perhaps the oldest surviving tree in Sherwood Forest.

The tree that survives today is sadly a shadow of its former self, having lived out a thousand year life-cycle.

Despite being aged the tree has had a resurgence in recent years and has re-grown phoenix-like to stand proud once again.

The tree stands on the south side of the road from Edwinstowe to Mansfield and can be visited at SK5765.

It was originally a boundary marker tree on the Royal Deer Park of Clipstone. Occupying the entrance to the deer park known as 'Warsope Gate' on the 1609 William Senior map of Clipstone.

The deer park occupied the northeastern third of the lordship of Clipstone, and provided timber, deer and hunting for the King.

The Parliament Oak was situated on the northern boundary of the deer park- with the park fence- or 'Pale' passing either side of the tree.

But where did the name for this magnificent oak tree come from?

Clipstone Park and its associated Royal Hunting Palace was the Royal Heart of Medieval Sherwood Forest- and was visited by all 8 monarchs from Henry II to Richard II.

Clipstone was so important that a number of monarchs are reputed to have held Parliaments there including King John:

'It has been stated, with some probability of truth, that King John, while hunting in the forest, was informed by a messenger of a revolt of the Welsh, and of an insurrection in the north of England; that he hastily summoned a parliament to meet under this tree, and that it owes its name to that incident' (Joseph Rodgers, The Scenery of Sherwood Forest with an Account of some Eminent People there, 1908).

It is more likely that the tree was named after the more famous and important parliament of Edward I in 1290.

The Parliament was a massive undertaking- with accommodation at the palace being stretched beyond capacity- the Chancery and its Clerks had to stay at the nearby village of Warsop (Crook 1976).

The Parliament Oak may well have been named after this event- perhaps it was named so because the Clerks and Chancery had to pass under its mighty boughs on the way to attend the Parliament from their quarters at Warsop...

The parliament of Edward I is linked to a national event of great romance.

Edward I was at Clipstone from the 19th- 23rd of September, and 12th of October- 11th November 1290 to attended his parliament (Dukery Records).

During this time his wife Eleanor of Castile took ill with a recurring fever. She was staying at the nearby Cistercian Abbey of Rufford.

The couple eventually attempted to travel to Lincoln perhaps for religious as well as medicinal reasons.

Eleanor died on the way- at Harby in Nottinghamshire having crossed the River Trent- some miles short of Lincoln.

Her entrails were buried in the high altar at Lincoln Cathedral- and her body was transported to London.

As Eleanor's funeral cortège travelled from Lincoln to London, a heart broken and devastated Edward erected wooden crosses at every one of the 12 stopping points on her journey- these were later rebuilt in stone as a permanent memorial to his wife.

They were known as the Eleanor Crosses.

A statue of Eleanor can be seen at Harby Church in Nottinghamshire- where she died. 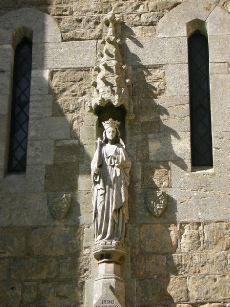 Picture: Statue of Eleanor of Castile at Harby Church on Nottinghamshire.

A tragic and romantic story- which shows that even Edward Longshanks had a soft side!

It can be seen then that Parliament Oak symbolises the importance of the Royal Hunting Palace, and deer park at Clipstone, and the importance of Sherwood Forest in medieval times- through the Parliaments that were carried out there and the national events that unfolded there. 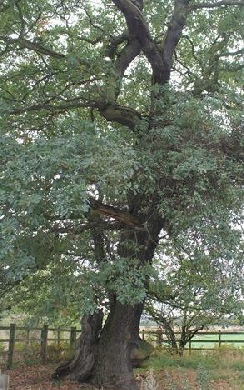