Nottingham Castle has dominated the skyline of Nottingham in one from or another for nearly a thousand years.

Construction began, almost immediately after the Norman conquest of England (which took place in 1066) in the year 1068. The work was overseen by William Peverel, who is said by some to have been the illegitimate son of William the Conqueror. William Peverel was constable of the Castle through his lifetime.

The original castle was a Motte and Bailey constructed of earth and timber, but was replace in stone over the centuries. It covered a very large area at its height with a number of inner and outer baileys.

Throughout the medieval period Nottingham Castle was one of the most important in the country, due to its strategic location at a major crossing of the River Trent. It was seen as the gateway to the north and seen as a key stronghold by the crown.

It was constructed on top of an imposing sandstone bluff which gave it a commanding position; with cliffs to the west, south and east. It must have been an awesome site in its heyday.

It was the scene of a number of great historical moments. Richard the Lionheart laid siege to the castle when he returned from crusade in 1194 to end the rebellion of his brother Prince John (such a story should have a resonance wth anyone who enjoys Hollywood films staring our very own Robin Hood!).

Edward III took back control of his kingdom from Roger Mortimer and Queen Isabella (the two were lovers, and she was Edwards mother) in 1330, by having his troops enter the castle via a tunnel (now named ‘Mortimer’s Hole’), and arrest the usurper, who yielded following a struggle.

Nottingham was positioned within Sherwood Forest in medieval times, with the southern boundary being the River Trent which lay a mile to the south of the castle.

The castle was home from the 1280’s onwards to the keepers of Sherwood Forest, who were usually also the Constables of Nottingham Castle. 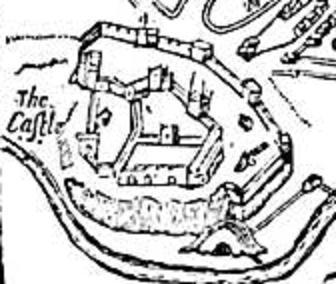 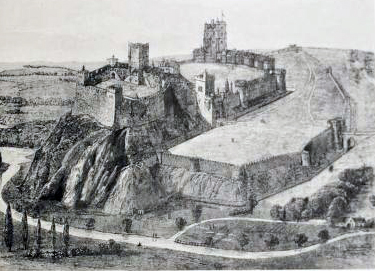 Picture: A reconstruction of Medieval Nottingham Castle as visualised in Victorian times. The park is in the low ground on the far side of the castle.
By James Mackenzie (1830-1900) - Mackenzie, James D. (1896) The Castles of England: Their Story and Structure, Vol II. New York: Macmillan., Public Domain, https://commons.wikimedia.org/w/index.php?curid=12851444 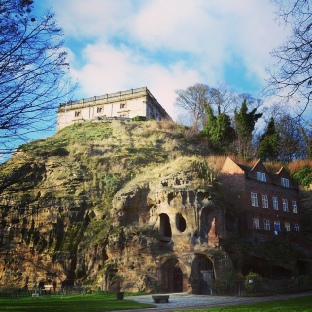 Picture: The Caves of Castle Rock Nottingham. The entrance to Mortimer's Hole (ground level centre) where Edward III's men entered the castle through a tunnel through the sandstone to capture Roger Mortimer and claim the throne in full for Edward III in 1330.
The 17th century Ducal Palace now sits on top of the sandstone cliff. ©Andy Gaunt & Mercian Archaeological Services CIC.

A medieval castle of such importance needed to be able to hold feasts and to allow the King and his retinue, or the constables and keepers, to entertain lavishly. Entertainment of the upper classes in medieval time meant eating and hunting.

Nottingham Castle was therefore provided with its own deer park.

Nottingham Castle Park was the oldest of the Royal Deer Parks of Sherwood Forest.

It was built to provide the King and his retinue with a plentiful supply of deer and the sport of hunting on the doorstep of Nottingham Castle.

Parks were generally used for housing Fallow Deer. Fallow deer were present in England prior to the Norman conquest but the Normans introduced them on a large scale, and as they were not native they needed housing in deer parks.

They were hunted by a method known as Bow and Stable hunting, where deer were driven past waiting hunters who who shoot them with arrows. If hunting took place in the park it would likely have been this method due to the relatively confined nature of the park. Women as well as men took part in such event.

Professional hunters would also likely trap deer for use in feasting.

The park at Nottingham was a royal park, attached to a royal castle. Which is why it as permitted to exist inside a royal Forest.

The Medieval park outline is still preserved on the landscape today in the large circular steep-sided bowl of ground it occupied to the west of Nottingham Castle. The town archery butts overlooked the park to the north (see Archery in the Forest entry) and the castle itself perched on its sandstone rock to the east.

The area it covered survives roughly as the 'Park Estate' built in the late 19th century by local architect T.C.Hine for the Duke of Newcastle to house the wealthy and well-to-do rich of the rapidly industrialising Nottingham. 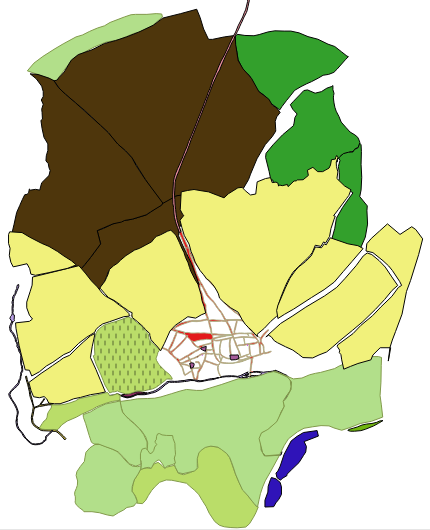 A medieval park was an area inside, or outside, of a Forest which was enclosed primarily for the purpose of containing deer.

A park was always enclosed within an artificial barrier, usually a fence or ‘Pale’, but also sometimes in stone as depicted in the image below.

Nottingham Park was enclosed within a timber pale. 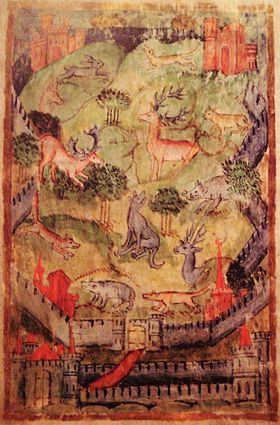 The medieval park was surrounded by a 3 metre high fence or 'park pale' to prevent the deer within it from escaping.

As well as for housing deer the Medieval Park was designed both to be a place of beautiful solitude - surrounded by sandstone cliffs and containing wood pasture and coppices; and as a supplier of produce.

No illustration survives from medieval times but the picture below from 1840 of the deer park shows something of the beauty of the site as it would have also been in medieval times too. 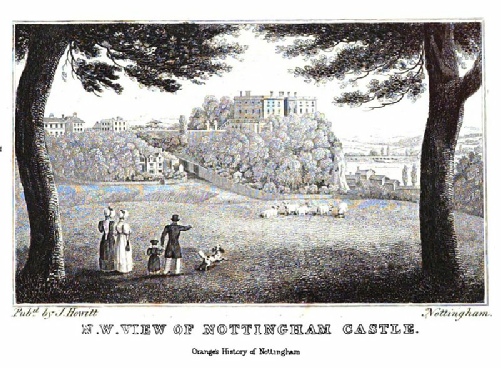 Picture: A view from within Nottingham Park with Nottingham Castle on ‘Castle Rock’ looking East.
By James Orange, 1840 - The History and Antiquities of Nottingham, Public Domain, https://commons.wikimedia.org/w/index.php?curid=23586238

William Peverel custodian and builder of Nottingham Castle was given 10 acres of land by the King, to make an orchard. This is recorded in the Domesday Book of 1086 (Morris 1977).

This most probably refers to the orchard set up by William Peverel, and was presumably a feature within the park .

Henry II added a falconry during his reign.

Falconry was a sport enjoyed by high-born women as well as men, and parks were places where both could mingle beyond the usual constraints of courtly life.

They were often the scene of affairs and lovers trysts.

As well as an orchard there was a rabbit warren, which may have taken the form of a 'Pillow Mound' (a mound of earth built over an artificial warren), but may have simply been an enclosed area for rabbits due to the soft nature of the sandy soils.

This was constructed before 1244 when a stock of rabbits were brought into the park (Drage 1999).

Fish for the castle were provided from the fish ponds in the park. The water from the pond probably came from the River Leen, which skirted its southern edge. 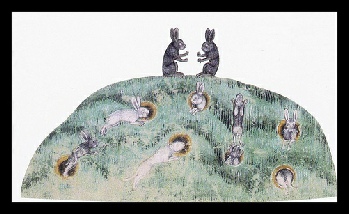 The presence of a deer herd attached to the castle would have allowed the king to provide gifts and payments to loyal subjects.

Many deer were sent to important dignitaries throughout the medieval period (see Hunting v Finance entry for more on the use of gifts for payment of service).

The park was entered from a gateway in the western wall of the castle bailey (Foulds 2004) which may have reduced the defensive capabilities of the castle, but improved access to the park (clearly the amenities offered by a park were deemed very important!).

It was previously thought the front gate of the castle was used on the eastern side with hunting parties having to ride around the castle walls and negotiate the ponds, leats, and five water mills located along the southern side of the castle if they tried to approach that way (not very satisfactory).

Lenton Prioiry owned a small cell or hermitage of caves in the sandstone supported by a number of monks known as 'St Mary de la Roche' (St. Mary of the Rock).

These caves were carved into the southern side of a small escarpment forming natural cliffs, which lay on the southern edge of the park (the caves are now behind private property on modern day Castle Boulevard) separated by the diverted River Leen, from the town Meadows to the south. 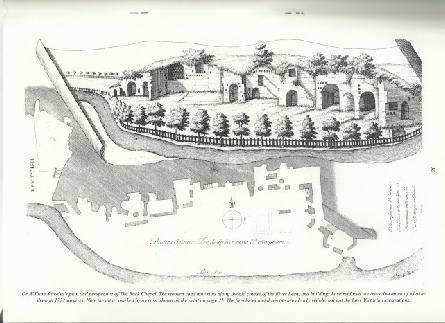 'In 1225 Henry III issued a mandate to the Sheriffs of Nottingham and Derby to let two monks of Lenton celebrating divine services daily for the souls of the King's ancestors ''at a rock without the castle of Nottingham'' have 4d a day from the issues of the two counties for their maintenance, as they had been used to receive from previous sheriffs (Calendar of Patent Rolls, Henry III, Vol 1247-58)' (Green 1936).

This Hermitage is listed on the Belvoir Map as 'Ye Roche' (Barley 1986), and is mistakenly shown as 'Druidic Remains' by George Sanderson in his 1835 Map of 20 Miles Around Mansfield (more to come on the chapel of St Mary of the Rock soon).

So as well as being a home to deer for the King to hunt, a royal retreat, an orchard, rabbit warren and supplier of fish, the Royal Nottingham Park was also home to a small Hermitage of Monks living in a system of caves and praying for the souls of the medieval Kings of England.

Also, it is worth considering the idea that chapels and hermitages, as well as performing a religious role, were also an important ingredient in Arthurian and other romance literature of the day and formed a common element in designed romantic hunting landscapes (Creighton 2013).

So it is highly likely that this hermitage as well as being a religious entity, was also an element within a designed parkland landscape.

In 2011 the current author (Andy Gaunt, 2011) identified the nearby landscape of Clipstone as a designed medieval ‘Romance and hunting landscape’.

At Clipstone a ‘Chapel of St Edwin’, constructed in the reign of King John, formed part of a landscape including rabbit warrens, fish ponds, a great lake, and deer park, surrounding the King’s Royal hunting palace at the heart of the Forest.

The landscape there provided views to and from the palace and invited visitors to experience an Arthurian style landscape similar to that depicted in the romance literature of the day.

Nottingham Castle was the scene of royal visits and even of chivalric tournaments (see tournaments and melee in Sherwood Forest, entry), it seems highly likely that as well as providing hunting, game, fish, rabbits and an orchard for feasting, the park also provided a chivalric romance backdrop to the castle for entertaining guests and as a pleasure gardens for enjoyment.

It is clear then, that Medieval Deer Parks were certainly for more than just hunting, and were significant places in the medieval Forest landscape.

You can find out about the later history of the park and how it became the housing estate that it is today here: https://en.wikipedia.org/wiki/The_Park_Estate

And about the Park today: http://www.thenottinghamparkestateltd.co.uk

And about visiting Nottingham Castle: https://www.visit-nottinghamshire.co.uk/things-to-do/nottingham-castle-p357581