The following is a “Story from the Forest” which aims to bring history to life. The story is a description of a journey from Newstead Priory to The King’s Houses at Clipstone, in medieval times, and traces the likely route a traveller route through the world famous Sherwood Forest, a traveller would have taken, and gives an idea of what they might have seen along the way.

The story is based on a landscape recreated by historic mapping and document research, LiDAR analysis and much more undertaken by Andy Gaunt and Mercian.

Work is currently underway to create a new up-to-date interactive virtual visualisation of the site of King John’s Palace.

The aim of the Sherwood Forest Archaeology Project overall is not simply to investigate and to recreate past landscapes, but also to bring them to life through story-telling, writing and visualisation.

We hope you enjoy the journey… 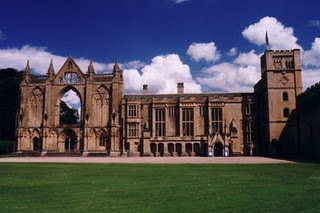 In the Medieval Period it was on the western side of the 'High Forest' area of Sherwood, halfway along the western highway from Nottingham in the south to the Royal Manor of Mansfield to the north and was a favoured stop over for travellers.

Most travellers staying at Newstead priory and taking advantage of the hospitality of the Augustinian Canons of Sherwood, who lived there, would have been travelling north or south along the western highway.

However many people in the area would have been undertaking a journey as part of their everyday business in the forest.

The following describes a journey through the medieval landscape of Sherwood Forest, from Newstead Priory to the Kings royal hunting palace at Clipstone 7 1/2  miles to the north east as the crow flies.

Leaving the confines of the priory the traveller would head up the western highway of the forest, still in the grounds of Newstead heading north. To the left the 'Swynisti (pig road) dale' (a reference to the importance of pigs in the Forest landscape) rose to the east running up that way from the valley of the Leen where the priory nestled.

Keeping 'Swynisti dale' to the left hand side the traveller would head further north into the 'Dedde Quene Dale' and head up through the wood that clung to is sides- 'Dedde Quendale wode'. After a short while the path swung east and emerged out of woodland after about a mile, onto the open oak-studded heather-clad heath land in the parish of Blidworth.

The well informed traveller would be aware that this lordship was under the ownership of the Archbishop of York, and had been since Domesday. It would be well not to get caught breaking the Forest law here as the penalty could include Excommunication on top of all the other forms of punishment that could be on the menu.

The road to Blidworth climbed up onto a higher ridge of land and followed the route of the current Ricket lane. It might have been possible to see the herds of the village grazing on the oak-studded heath as it stretched for 3 miles to the southeast across a number of hills and valleys.

After a further mile across the heath of Blidworth the arable fields of the village were crossed by the track way. In the valley to the south lay the 'Blyworth fyspole' (the fish pond of the village) at the source of the Doverbeck River which was a boundary of Sherwood Forest further to the south east.

In the valley to the north was Rainworth Water with a moated enclosure- home to the Keeper of Lyndhurst wood, which covered the hills to the north.

Men would have dotted the great arable fields tilling the land, and the church of St Mary of the Purification would be visible in the distance.

Having passed through Blidworth the road to Clipstone ran north west towards Oxweydale the (Ox way), before striking north into Blidworth Wode. This large wood stretched for miles to the east and merged with 'Hay Wode' (modern day Haywood Oaks), 'Balkhaw', 'Syre Birkes', 'Lerche haw', 'ye Byschopes Wode' and the 'Burne Abotote wood' (the Brown Abbots Wood- belonging to the Abbot of Rufford) to form a great wood that covered much of the area.

The road crossed the 'Reinwarth Forthe' (modern day Rainworth (forthe- ford)) and left the woodland canopy to once again cross a great swathe of heath land- this time the south-western end of the open-grazing oak-studded heathland of Mansfield.

It then travelled further north skirting the sides of the hill of 'Kynggus (King's) Ymmislow' and again entering woodland. Here the wood belonged to the crown and was known as 'Nomannes Wode' (the wood belonging to no man). This wood merged into another large area of woodland which included 'Wodhous Wode' (Mansfield Woodhouse Wood).

The track way passed the head of a valley known as 'Falous dale', before crossing the ‘Warmebrook’ know today as ‘Vicar Water’ river at 'ye Blake Forthe (ford)'.

The road then ran alongside the southern edge of the great Park of Clipstone- a Royal hunting park which was enclosed within a three metre high park fence or Pale to prevent the highly prized deer within from escaping.

The traveller would not fail to be impressed by this status symbol of the Crown and would have been well aware that entry was not a wise option. The road then headed down the valley into Fliskerhaw wood, and out onto the open grass-lands of the 'launds' (deer lawns) of Clipstone Lordship.

The areas were open grazing land for the deer, and provided views to and from the palace as part of the designed romance landscape developed by the crown  around their hunting palace.

It would be at this moment that the magnificent Royal Hunting Palace of Clipstone loomed into view. Beautiful, dazzling white in the sun, and set gracefully on a spur of land between the valleys of the River Maun and Vicar Water. This Palace was impressive and dominated the landscape. 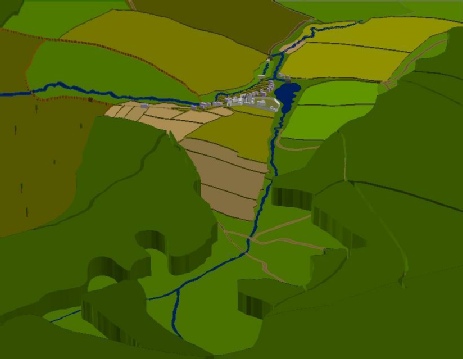 The King's Houses at Clipstone- now known as King John's Palace were set against a landscape of woodland and deer lawns, encircled on the far side by a great pond, and separated from the approach of a traveller from the west by a large ditch and palisade. 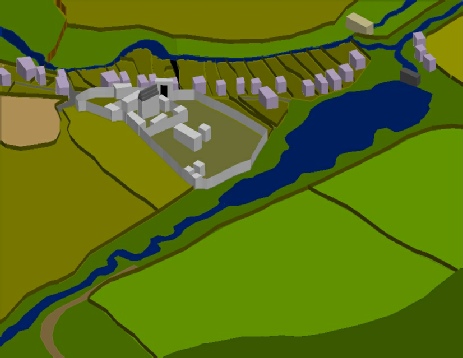 It should have been possible for a traveller to find accommodation in the village (provided the King wasn't in town with his retinue).

An important visitor might find accommodation in one of the many halls and dormitories within the royal complex, and enjoy hunting at the king's pleasure in his park.

But for all travellers, of high and low status, the arrival in this sylvan retreat would have been greatly welcomed, as the forest had been safely navigated for another day.

Why not click on the two maps below the top map focuses on the area around Newsetad Abbey. The bottom map focuses on the area around King John’s Palace in King’s Clipstone. Clipstone lies to the north-east of Newstead, but much of the journey is now untraceable on the modern landscape. However, some of the features including ‘Ricket Lane’ which travels from north of Newstead towards Blidworth, is still present.