There were many religious houses in Sherwood Forest; the most famous ones are at Rufford Abbey, Newstead Abbey (photo left), and the remains of Worksop Priory (Gatehouse). 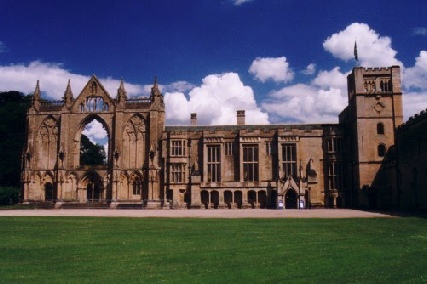 The largest and most wealthy religious house in Sherwood Forest was built on the outskirts of Nottingham at Lenton.

Lenton Priory would dominate the religious life of Nottingham for hundreds of years.

The Monasteries and Priories represented all the major religious orders of Cluniacs, Cistercians, Augustinians, Premonstratensians… and others…

These religious orders followed in one way or another, the code of St Benedict who was active in the early 6th century and lived a reclusive life dedicated to prayer and spirituality.

Monks had been in England since the dark ages, but the Normans brought with them a massive passion for monasteries and monastic life.

Medieval society was divided into 3 parts- ‘those who fought’, ‘those who worked’ and ‘those who prayed’.

The ones who fought had killed a lot of people- especially during the conquest- and they therefore need a lot of those who prayed to seek forgiveness for them. 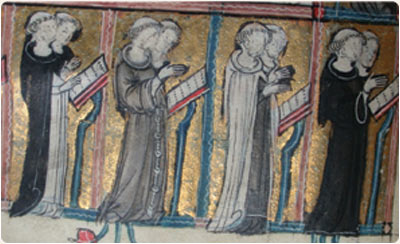 Monasteries offering prayers for souls were a worthwhile investment for rich noblemen who wanted to get into heaven- and so hundreds of religious houses sprang up in Medieval England.

Sherwood Forest with it secluded areas of heath and woodland was no exception.

Monks lived away from society in monasteries and priories- so Sherwood Forest was ideal for them.

In the late 11th and early 12th century a new wave of monks known as the Cistercians sprang up across Europe.

They truly wanted seclusion- the Cistercian House in Sherwood Forest was built at Rufford.

Here the monk’s desire for seclusion resulted in the destruction of no less than 3 villages, with the people being forced from their lands.

In the 13th century things changed and a new wave of religious fervour swept across the continent.

Many people sought to imitate Christ by joining communities of Friars.

Friars differed from Monks in that they did not live in isolated communities, but lived amongst the people surviving originally from begging and handouts.

There were a number of orders the most famous being the Franciscans- following the teachings of St Francis who urged a life of strict poverty. Their costume resulted in them being known as the ‘Grey Friars’.

Alongside the Franciscans were the ‘Back Friars’ or Dominicans who followed the order of St Dominic.

A third order of friars known as the 'White Friars' were called the Carmelites.

Two of these orders of friars in Sherwood set up houses in Nottingham. The White Friars on the current site of the Bell Inn on Chapel Bar, and the Grey Friars at the foot of the cliff in the poor Broadmarsh area.

This closeness to people made the friars immensely popular.

the Monks & Friars of Sherwood Forest