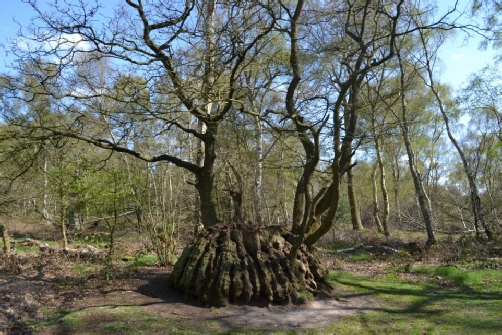 This beautiful ancient oak has lived for hundreds of years and at potentially 600 years old- she has been alive since medieval times!

A truly amazing and wonderful lady.

She has even survived an attempt to fell her in the not too distant past, and has sprung back to life with serpent-like branches reclaiming her former crown.

This is where she gets her name.

She sits proud; shrouded in a skirt of moss and lichen, surrounded by young oak saplings and slender Silver Birch...

Chopping down trees, including oak, at the base will result in re-growth with many shoots. This process known as ‘coppicing’, takes advantage of the natural regeneration of certain tree species including Oak, Hazel, Ash, Maple, Sweet Chestnut, and Lime.

It was a major method of woodland management throughout the medieval period. This method enabled wood to be harvested at intervals (the length of time between cuttings, determining the thickness of the timber).

Another method of harvesting timber from trees, without cutting them down, which was employed in medieval times, was a practice known as ‘Pollarding’.

Pollarding involved removing the crown from trees- chopping back all the branches to leave just the trunk, or a ‘stubb’ from which new growth would subsequently emerge.

This method was undertaken above the height of browsing livestock and deer, so as to protect the shoots from being eaten as they grew.

It was commonly employed in Sherwood Forest, in the Deer Parks belonging to the crown, so that there was provision of timber safe from browsing deer (and also cows).

Sadly, in Sherwood Forest there are few if any pollards from the medieval period.

The park in nearby Clipstone which would have once been filled with such trees, has no pollards surviving today. The trees there were chopped down in their hundreds during the Civil War of the 17th century.

At this time Parliamentarians are accused of laying waste to the absent Royalist Earl of Newcastle’s park (then the owner of the land), while they held the manor during the war.

In medieval times Clipstone park was in crown hands and was one of three such parks in Sherwood Forest.

The only truly ancient oaks in Clipstone nowadays are the ‘Parliament Oak’ who is mentioned in his own ‘story’ elsewhere on the page, and the ‘Churn Oak’- both of which were formerly boundary trees from the park, and not pollards.

The ancient veteran oak trees living in what is now the Sherwood Forest National Nature Reserve, which date from medieval times, are likely to have grown in more open wood-pasture landscape (with some areas of closed-canopy) where deer and cattle grazed in among the trees.

Medusa is probably one such tree.

She was sawn down possibly by the military during the Second World War, or just after, or by forestry workers after the military had departed; due to her proximity to a route-way.

Her ancient girth, and interesting growth around her lower half meant she was chopped down a metre above ground level.

She was therefore neither a ‘coppice’ - being cut too high from the ground, nor a ‘pollard’ as she is too short.

She probably instead qualifies as half way between - as a ‘coppard’.

Although she has not likely been cut to provide timber for future harvest, so if a ‘coppard’ - then likely an accidental one.

In reality she was probably not meant to survive.

But no-one had told medusa that.

This tree hadn’t survived hundreds of years to be sawn down and disappear, she would not suffer such an ignoble plight, or such lowly demise.

Fantastically she has grown new shoots which, snake-like, stand around her head.

In Greek mythology, Medusa was a Gorgon, a winged monster with snakes instead of hair.

If you looked into Medusa’s eyes you were turned to stone.

Unfortunately for her, this proved her downfall as she was beheaded by the hero Perseus who, escaping on the winged horse Pegasus, used her head as a weapon to turn his adversaries to stone, until he eventually gave it to the goddess Athena to place upon her shield.

Having killed Medusa he rescued Andromeda the daughter of the Ethiopian King Cepheus and Queen Cassiopeia, who he had fallen in love with.

This story is preserved on many beautiful archaeological artefacts from ancient Greece.

It is also depicted in the names of the constellations of the stars in the northern hemisphere.

The 16th century renaissance Bronze statue of ‘Perseus with the head of Medusa’ is one of the most famous renaissance sculptures. It stands in the Loggia dei Lanzi, adjacent to the Uffizi Gallery in Florence, Italy. 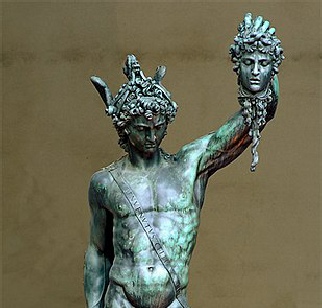 Picture: Perseus with the Head of Medusa

With regard to Sherwood Forest, the wonderful Medusa Oak sits at the north-east boundary of Birklands wood (a former crown wood in the heart of Medieval Sherwood Forest, which now makes up a part of the Sherwood Forest National Nature Reserve), due north of her more famous cousin the ‘Major Oak’ - legendary hideaway of Robin Hood.

A number of Medieval ‘perambulations’ of this wood survive.

A perambulation was the action of walking around an area of land. In this instance an area of woodland belonging to the king.

There are also perambulations of the whole of Sherwood Forest that survive from medieval times.

A perambulation means literally ‘to perambulate’ - to ‘walk’.

The surviving perambulations consist of a list of points or landscape features recorded in a document, that mark a boundary, which could then be checked by medieval Forest officials known as ‘Regarders’ (meaning to look- surveyors in other words), who could ‘walk’ around the edge of the wood to check it hadn’t been encroached upon. This was necessary as it was illegal to chop down timber without permission in a Forest.

One perambulation goes further and mentions:

This location is at the northeast of Birklands wood… very near to Medusa!

Could this moss and lichen covered oak tree, now known as Medusa Oak, with its reborn crown of serpents, be the Musmere Oak of Medieval tradition?

If only she could talk…