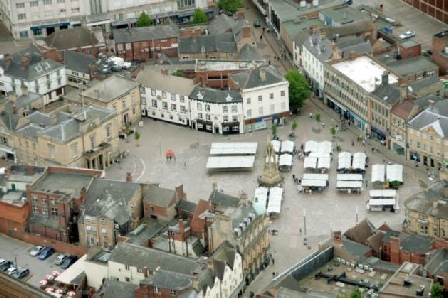 Photo: Mansfield from the air- from Chad Newspaper.

From the CHAD Newspaper:

“There’s still much to be discovered about Mansfield’s history, but local research has already uncovered an intriguing past for the town and surrounding areas.

It may not be seen as particularly salubrious these days, but back in the 13th century Mansfield was flourishing and vibrant place at the very heartbeat of medieval Nottinghamshire.

While the debate will always rage about the legend of Robin Hood and what did or did not happen, there’s no doubting that the town’s geographical position within Sherwood Forest ensured its strategic importance.

Back then, Mansfield was a royal crown manor - the biggest in the county - and a fair few number of villages in the surrounding area came under its jurisdiction, adding to its wealth and importance.

Sutton and Skegby were outliers attached to the manor of Mansfield in medieval times, as was Edwinstowe and later Mansfield Woodhouse.

Villages such as Warsop and Thoresby in the Forest, and even villages as far away as Carlton-on-Trent and Carlton-in-Lindrick paid dues to the Manor and people had to attend the manor court.

The market which still survives today, has been in existence since at least the early 13th century, and would have been thriving and a main source of income.

Mansfield was one of Nottinghamshire’s largest a market towns and, crucially, it was on the main western route through Sherwood Forest although the road to Nottingham ran a little further west than the current A60, passing through Newstead and close to the Griffin’s Head pub in Papplewick.

Newstead Abbey, or Newstead Priory as it was known, was situated on the highway and provided a stop over to travellers journeying through the Forest. The main industry of the time would not have been mining and textiles - which much of the 20th century town was built upon - but farming. A much more rural settlement in those days, where now sit housing estates once sat arable fields that were farmed for corn, beans and other crops, in rotation. It is the likely origin of road names such as Westfield Lane (there was a West Field, a North Field, a South Field and an Old Field), and Lindhurst Lane (named after Lindhurst wood).

Most folk would also have topped up their incomes with a second trade such as brewing beer, making pottery, spinning wool or collecting oak bark for the production of leather. The tanning process was frequently completed in the caves of Nottingham.

This insight into what life was like back then has been made possible by painstaking historical research down the years and also the work of organisations such as Mercian Archaeological Services CIC, a community interest company who were set up to undertake local archaeology projects alongside volunteers.

Although operating across the East Midlands, director Andy Gaunt’s area of expertise centres around Sherwood Forest, where he has led recent work at King John’s Palace in King’s Clipstone, one of a number of important heritage sites across the area.

His role has never been about separating fact from fiction, but he feels it is important for the future prosperity of the county to embrace local legends, while also discovering more about its fascinating past.

“There are references to making repairs to the King’s chambers in Mansfield, and although we don’t know for sure it is possible that Henry I came to town to stay, but he was lord of the Manor here and they were preparing property as if he was to visit,” said Gaunt.

“There’s no doubting that Mansfield carried great significance going back to Saxon times as a potential large estate centre. In medieval times it was in the middle of one of the King’s key forests, Sherwood was one of the biggest in the country.

Mansfield was a very wealthy place at that time.

“You could tell Sherwood Forest was seen as important and sizeable because it had six Foresters to patrol the area as opposed to the normal four and was estimated to cover some 100,000 acres.

“Mansfield sprung up where it was because of the river, which was obviously vital to getting water to the land in a predominantly dry, sandstone area. The areas soils were not very fertile for growing crops, and so people lived in villages together by water sources.

They kept large herds an flocks of pigs, sheep and cattle to supplement their crops and to help fertilise their fields. These were grazed on the large areas of heathland and in the woodland that dominated the surrounding landscape of the Forest.”

“Because not as many areas were cleared for farming, more of the natural heathland and woodland remained, making it the perfect location for a royal Forest that would provide the ideal habitat for deer to prosper that could be hunted by the king.”

While Sherwood Forest is now considered to cover a relatively small area - generally recognised as being confined to the Birklands and Budby South woodlands - it once stretched from Budby in the north of the county, to Gunthorpe in the southeast, Nottingham at Trent Bridge in the south, and from the outskirts of Kirkby in the west to Ollerton in the east, covering some 20 miles by eight miles.

The entire area was the subject to forest law, meaning no-one but the King and those invited by him were allowed to hunt the resident venison.

Native species were red and roe deer while the Normans introduced fallow deer and also rabbits, the latter originally kept in warrens.

Recent excavation work at King John’s Palace in Clipstone has revealed it was one such site where rabbits were housed before they later escaped into the wild. It is not the only exciting discovery that was made.

Gaunt added: “It was King Henry II who instigated the building of a royal palace at King’s Clipstone, which was visited by all eight monarchs until the reign of Richard II.

“In medieval times the King’s court travelled around to ensure rule was enforced. They spent a good amount of time in the north, because it was those areas that were considered most rebellious. By the time of Henry VIII and the Tudors attention had switched to the south and monarchs no longer toured so widely.

“Edward II is thought to have stayed at King’s John Palace no less than nine times and other famous Kings to stay there are ‘bad’ King John, from where the palace gets its name, and ‘good’ King Richard the Lionheart, both entwined with the Robin Hood legends.

“Work has been carried out there for the last decade, with the help and understanding of land owner Micky Bradley, but it’s in the last year or two there have been a lot more excavations and investigations, which have shown just what an important royal residence it was and how extensive it was, including a deer park with a seven-mile boundary.

“We have discovered a four to five metre wide ditch with medieval pottery in it which formed the boundary of the palace enclosing an area of seven acres. It shows it to be as big as some of the other most important royal palaces of the time such as Clarendon and Woodstock - and its right on our doorstep.”

Of course, keeping Sherwood Forest clear of poachers and enforcing forest law was no easy task at a time when food was scarce and there were a number of outlaws on the run.

Trying to keep order were the Foresters, based at Laxton Castle, close to Ollerton, and working under the supervision of a Forest keeper.

Documentary evidence showed that among those who carried that power were two ladies of the de Caux and d’Everingham families,

“Everyone’s heard the stories about Robin Hood, which became popular during Edwardian and Victorian times, but there were other outlaws around too, such as Roger Godberg, who is recorded as being outlawed, and sought shelter in Sherwood Forest, (he was actually harboured at Jordan’s Castle in the village of Wellow)” said Gaunt.

“So extensive was the forest that people could move around and hide without being detected and thus avoid capture.

“Even today there have been reports of people hiding out in woods locally to avoid being arrested, but of course the forest was so much more extensive then. The keepers would certainly have had their hands full.”

While so much progress has been made, Gaunt insists there is still plenty to be investigated and he is keen to recruit willing volunteers to assist on future projects. It’s an invitation well worth considering. After all, the next exciting discovery could be just around the corner.