In 1215 the Barons of England forced King John to sign the Magna Carta - the Great Charter. 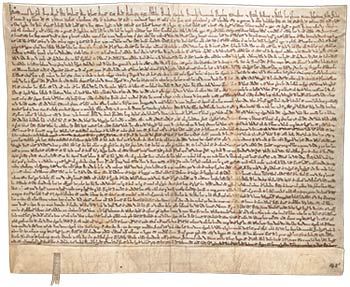 This great charter was an important document which aimed to limit the powers of the king and protect the rights of the aristocracy.

Magna Carta has been influential on many constitutions written since and forms the basis of the United States Constitution.

Magna Carta contained clauses relating to Forest issues, and was followed in 1217 by a seperate 'Carta de Foresta' - the Charter of the Forest.

The Angevin Kings (Henry I, Richard the Lionheart and King John) had been very powerful since they came to power in 1154; and they had expanded royal jurisdiction across all aspects of their realm.

Their thirst for power was manifested in their expansion of Forest law over many new areas of the country. In Nottinghamshire the Forest Law was spread across all of Nottinghamshire north and west of the River Trent.

Much to the displeasure of the local ruling classes.

The expansion of Forest law - especially in the north of England was one of the catalysts of the Baronial uprising that led to Magna Carta (Holt 1992).

In 1215 the barons had (as said) forced King John to sign Magna Carta; at Runneymead on the 10th June.

The King signed the document, but he had little intention of yielding to its demands. He had the support of the pope who agreed that the document was improper as it had been extracted under duress.

The pope anulled Magna Carta; and the King turned on his enemies- England was plunged into a civil war known as the First Barons' War.

During this conflict King John is believed to have lost the crown Jewels on the coast of the 'Wash' in eastern England, before dying in the gate house at Newark Castle, Nottinghamshire in 1216. 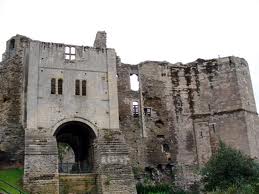 The Barons had replaced John with King Louis - the son of the King of France, during the conflict.

Louis was defeated- and for all intents and purposes his reign is overlooked and even over-written in history.

There is no King Louis in the list of English and British Monarchs.

Picture: Defeat of the French at the Battle of Sandwich 1217

Magna Carta was reissued in 1216/17 this time with a separate Charter of the Forest.

This charter was signed under William Marshall who was acting as regent to the 9 year old Henry III.

These limits on forest law were further extended in 1217 when a separate Charter of the Forest was proclaimed. 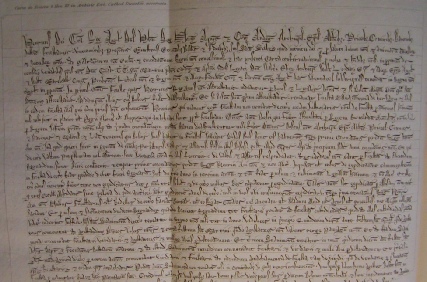 Picture: Part of the Charter of the Forest

There were 17 proclamations in the charter. Including those related to removing the claws of dogs, which persons could hunt with hawks, and those allowing Bishops and other high powered folk to take a deer whilst passing through the forest.

The charter outlined and enshrined many of the common rights of peasant and landowners to access Forest lands, to utilise resources, and for the grazing of livestock.

Perhaps the most important elements were limitations on the extents of the forest, and the banning of execution and mutilation as punishments against people who killed deer in the forest.

The removal of execution, torture and maiming had a great effect on the implementation of forest law.

Over time it became more about extracting fines and levies- than removing limbs and other parts- more of a financial cash cow- valued for its contribution to the royal coffers.

Perhaps the most important impact for Sherwood Forest was the restriction it placed on the bounds of the forest.

Under Henry II and his sons Richard and John all of Nottinghamshire north and west of the Trent were forest.

The Forest Charter plunged the officials and local landowners into nearly a century of disputes over the boundaries of Sherwood Forest, that would eventually see it confined within boundaries that would then remain throughout the Medieval period.

These boundaries may well have been those of the original forest, a question still being investigated by Archaeologists and Historians to this day.