In 1194 Richard the Lionheart gave a licence to hold tournaments to five locations in England. Interestingly for our story one of those was at Blyth in Nottinghamshire. 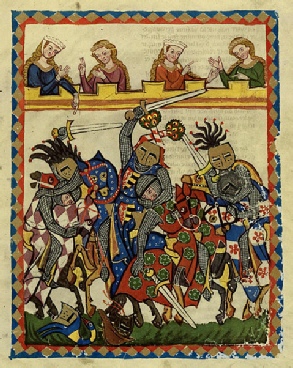 In the 12th century when this royal Licence was granted Blyth was within the Royal Forests of Nottinghamshire. 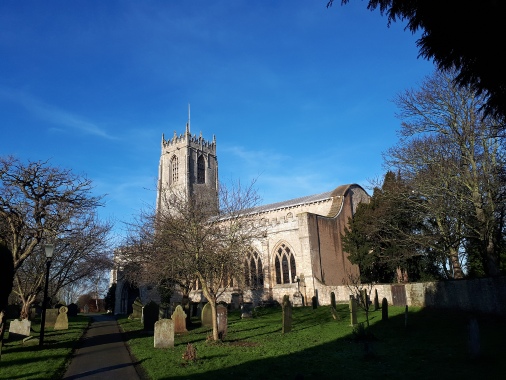 King Richard had to bring about this act because his father Henry II had made tournaments illegal.

He saw them as a source of disorder.

Bunches of heavily armed testosterone fuelled young men running around armed to the teeth was not regarded as a sensible idea by Henry II: desperate to restore order to England after 20 years of civil war.

Unlike his father, King Richard I saw the tournament as the best way to train men for combat.

They rapidly became a method for skilled and ambitious men to become rich and famous, and tournaments were held across the continent.

The original tournaments were based on the melee, where large numbers of knights would fight as individuals or in teams- on horse or on foot.

The fights were not for fun, they were treated like real battles, and combatants who were captured were ransomed

This meant plenty of money could be made by the would be champion.

Perhaps the greatest Knight of his age, William Marshall the later Earl of Pembroke-  rose through the ranks at the tournaments to become firstly the tournament captain for Henry II's son (Henry the Young King), then after winning his fortune around the tournament fields of France and England he managed a short spell on crusade in the holy land,  became the trusted servant and general of King Richard I and King John, before being made Earl of Pembroke and then the Regent of England for the young Henry III in 1216.

In this role he helped defeat Louis of France who had made claim to the English throne- leading the charge at the 2nd Battle of Lincoln in 1216 aged in his seventies.

He oversaw the sealing of the Magna Charta in 1215, and then brought into being the separate Charter of the Forest in 1217- that would have a great impact on the boundaries and rules of Medieval Sherwood Forest.

Quite a life by anyone's standards!

He became a Templar Knight on his deathbed and is buried in the Temple Church in London.

It was the opportunity of the tournament field that gave him his start on the road to greatness. It was a road that through Magna Carta, and the subsequent Forest Charter would have a great impact on Medieval Sherwood Forest.

Picture: William Marshall in a tournament

These original tournaments became the testing ground for Knights across Europe.

The tournament melee could seem a disorganised affair- but in the hands of such tournament captains’; great skill and ingenuity was employed to bring glory on the field.

Melees were incredibly violent, and injury a likely occurrence- William Marshall’s helmet was so badly dented on one occasion he could not take it off. When they wanted to present him with his prize he was eventually found with his head on the blacksmith’s anvil having the dents beaten out of his helmet by the blacksmiths hammer; so he could remove it!!! (Jones 2007).

In the forests of Nottingham it was at Blyth in these earlier days that these tournaments were held.

Blyth was in the Hatfield District of the Wapentake (Hundred district) of Bassetlaw in North Nottinghamshire.

An expanse of natural heath (Hatfield means heath field), it was an area obviously suited to a royal forest.

It may have been in the forest since soon after the conquest, but the boundary at that time is not fully known.

Blyth belonged at Domesday to the great baron Roger De Busli whose land holdings were based on the castle of Tickhill about four miles to the north.

This grouping of lands was therefore known as the ‘Honour of Tickhill’.

These lands defaulted to the crown in 1100 when Roger’s successor Roger Belleme fought on the wrong side during Henry I’s campaign to regain his Norman possessions.

With the honour of Tickhill in crown hands forest law seems to have spread over the area.

The Historic Environment Record (HER) for Nottinghamshire lists ‘Raker Field’ to the south of the village of Styrupp near Blyth as the tournament field- but this is disputed- certainly it would be small- as melee fields could be up to three miles across. 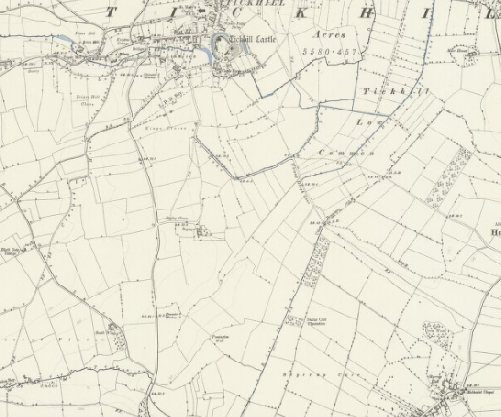 But it is in the right area: in his ‘A History of Nottinghamshire’ Cornelius Brown wrote in 1891:

‘A level tract of land between Blyth and Styrrup was the locality where feats of horsemanship took place, in which the flower of English chivalry sometimes under the personal patronage of royalty itself. We can well imagine the animated scenes that must have occurred at these war-like gatherings... Many allusions are made in the Close Rolls to the Blyth meeting, which continued till the end of the sixteenth century, when popular taste began to change and tournaments became but a reminiscence of the past’.

It is the opinion of the author (Andy Gaunt) that the field covered much of the land between the village of Blyth, or the township of Styrrup in the south and the village of Tickhill in the north. The opposing armies would be billeted in the two towns of Blyth and Tickhill respectively. 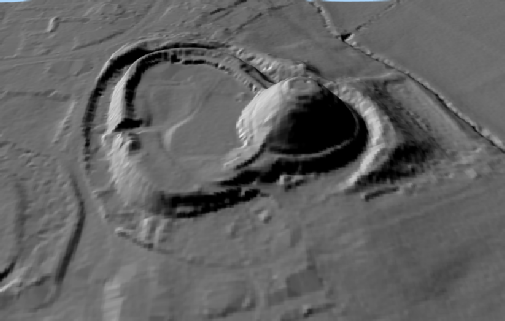 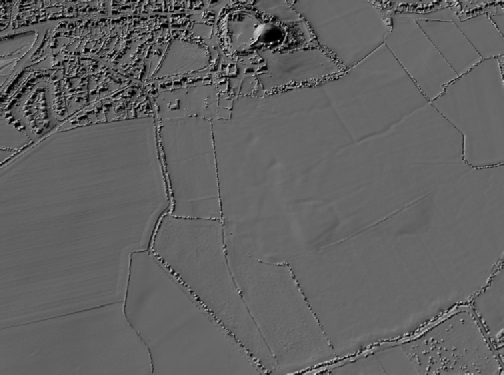 Prior to becoming king in 1272, Edward (longshanks, soon to be Edward I), fought his first tournament on June of that year at Blyth.

According to Morris in his book “A Great and Terrible King: Edward I and the forging of England” states:

“The event, which took place at Blyth in Nottinghamshire, had been specially arranged on his behalf, and was probably given the go-ahead only after a certain amount of special pleading: in general Henry III disapproved of tournaments, and always took steps to ban them. According to Matthew Paris, the meeting at Blyth was intended as an introduction to the ‘laws of chivalry’. Edward must have already been an accomplished horseman and proficient in the use of weapons. What he needed, and what a tournament offered, was the opportunity to put these skills into practice, to demonstrate his capacity for prowess and courage, and to learn the strategic arts of war” (Morris, 2008, p 25).

So it seems that tournaments at Blyth were a common feature throughout the period.

Public tastes did indeed change, and the tournament evolved through the medieval period.

Melees often started with a joust where protagonists would charge at each other in an attempt to unseat the opponent or ‘tilt’ him from his horse. Once this had happened the melee would ensue.

The statute of Arms of Edward I in 1292 brought in the use of blunt weapons in the tournament. By this time jousting had begun to take over in popularity from tournament fighting via the melee. 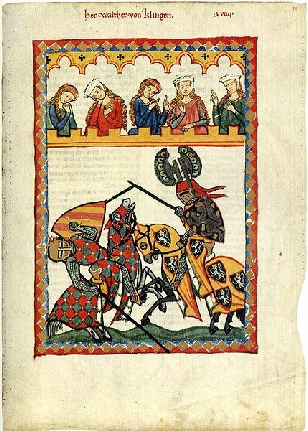 The joust would take chivalrous spectacle to new levels. It is this method of contest that is the most familiar to us from the medieval tournament.

In 1328 Edward III held a joust at Clipstone, the royal hunting palace in the heart of Sherwood Forest.

Actually there is some confusion among historians as to whether the jousting tournament took place in late 1327 or early 1328; Ian Mortimer gives the likely date of the tournament as shortly after the death of Edward II,  suggesting the 15th - 16th November 1327, and lists an entry E101/383/3 m2 as support for this where gold thread was purchased for decorating purple harnesses for the tournament at Clipstone. (Mortimer 2006, pp 65 & 449).

Richard Barber suggests that the tournament at Clipstone happened after the funeral of Edward II, not before, “…At the end of the year, after his father’s funeral on 20 December, he held a series of tournaments in a chain of festivities which lasted from Christmas until after his marriage to Philippa of Hainult at the end of January. These began at Worcester on 23 December, continued with events at royal hunting lodges at Clipstone in Sherwood Forest and ended at Rothwell in Yorkshire in mid-January, before the festivities at York on 25-8 January”.

“We have detailed accounts for some of his equipment, such as the two suits of armour covered in purple velvet made for the Clipstone  tournament,  embroidered with 21,800  gold threads in a pattern of crowns and oak leaves at a cost of £8 3s. 4d. “ (Barber, R. 2014 Edward III and the Triumph of England. Penguin Books. p50).

“Clipstone is the first recorded instance of a very rare practice of jousting at night; there is one other known example in England later in Edward’s  reign, at Bristol on New Year’s Day 1358. The image of the young King riding out into the night, the torchlight glinting on the gold of his armour, is a harbinger of the highly visual nature of Edward’s later knightly celebrations” (Barber, R. 2014 Edward III and the Triumph of England. Penguin Books. p50).

Imagine the spectacle. One of the great nights in he history of Clipstone for sure.

A little later in his reign, in 1334 Edward III also held a tournament in Nottingham in Sherwood Forest.

Perhaps to tie in with the Forest Eyre court held in that year (see the 1334 Sherwood Forest Eyre Court entry for more details).

No description of the affair survives, but a near contemporary description survives for a joust and tournament, and it sounds like a spectacular affair:

‘When the earls, barons, and a great number of ladies had gathered on the Sunday, January 19, the king gave a solemn feast and the great hall of the castle was filled by the ladies... At this great gathering there were two queens, nine countesses, the wives of barons, knights and citizens, whom they could not easily count... in tents and other places, where food and all other necessities had been prepared; everything was on a generous scale and served unstinting... In the evening dancing and various entertainments were laid on in magnificent fashion. For three days following, the king with nineteen other knights held jousts against all comers; and the king himself, not because of his kingly rank but because of his great exertions and the good fortune that he had during the three days, was held to be the best of the defenders’.  Adam of Murimuth 1344 (Munby et al 2008).

This description of tournament comes from Edward III’s Round Table Feast where he founded an 'Order of the Round Table' based on the legends of King Arthur.

This order of the Round Table would be reduced later in his reign into the 'Order of the Garter' which survives to this day.

The joust and the tournament had moved from a training place for young knights in blood thirsty melees to the height of the chivalric ideal.

In Sherwood Forest the tournaments at Blyth, Clipstone and Nottingham were part of this embodiment of knightly virtues.

As stated above, at Blyth there are accounts of tournaments throughout the medieval period, showing how popular this form of entertainment was to the upper echelons of society in the medieval period, and how it formed a colourful and glamorous part of the story of Medieval Sherwood Forest.

The Melee and Jousting: Tournaments in Medieval Sherwood Forest