Fairs were an important part of medieval life.

They were essentially large markets.

Their size, and the fact that they were less frequent; enabled goods to be traded from further afield.

As a result they were worth a lot of money to their owners and carried great prestige. 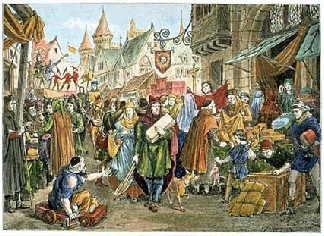 Competition often occurred with towns folk who held stalls at the local markets.

One of the largest fairs in medieval Sherwood Forest was held annually at Lenton Priory- the largest and wealthiest religious house in Nottinghamshire.

Lenton fair had stalls for 'bedders', 'fishers', 'skinners', 'mercers', 'drapers', and 'cookeries' (food stalls) amongst others, and there were silks and spices from across the known world...

The weekday market (at weekday cross in the current Lace Maket, Nottingham) and the Saturday market (held in the market square in the centre of town) were closed down for such events.

To appease the locals; compensation was paid to the marketeers, who were also granted the first choice of stalls at the fair. 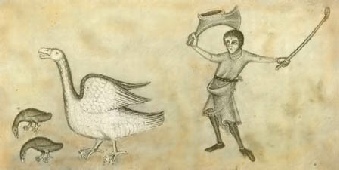 The oldest surviving fair with Medieval origins in Sherwood Forest is 'Goose Fair'.

It is believed that the name comes from the droving of Geese to the market by traders.

Goose was traditionally consumed at the feast of Michaelmas which falls on the 29th of September.

The first reference to what would become 'Goose Fair' comes from a charter of 1284 in the reign of Edward I- permiting an 8 day fair in the town of Nottingham around the feast of St Matthew in September.

As a result the fair was originally known as 'St Matthew's Fair' and although it became known as 'Goose fair'- there is no historical account of a specialisation in geese- in the 17th century it was predominantly a horse fair and by the 18th century it was famous for cheese!

Goose Fair was originally held in the market square in the centre of Nottingham, but moved to the 'Forest recreation ground' in the early 20th century following centuries of fun, boozing, debauchery, and the odd riot or two.

Alongside the clammer, mayhem and noise; the bright silks and smoke from fires; the air would have been thick with the smell of fish, animal hides and flesh, spices and fruits. Stall holders would have rubbed shoulders in the market square with booze sellers, cut-purses, ne'er-do-wells, outlaws, friars and clergymen, bear-baters, mummers, dancers, performers, musicians, and entertainers.

Later accounts show how the focus shifted more and more from the trading event to a travelling show, but they also give an insight into the life and vibrancy of the event.

An 18th century account shows: 'caravan after caravan, cart after cart... peculiar looking people, that are as necessary to a fair as flowers are to May... all kinds of strollers, beggars, gipsies, singers, dances, players on harps... and similar wandering artists and professors' (Beckett and Tolley 2006 in Beckett (ed.) 2006).

The Medieval fair must also have been home to similar entertainments...

By Victorian times Goose Fair had evolved essentially into a funfair.

Goose fair is still held annually in Nottingham in the first week in October- and is now one of the largest and most popular travelling fair grounds in Europe...

...sadly little resembling the original Medieval trading fair currently survives, but maybe that will change in the years to come?