Medieval society and the medieval landscape were for the common person predominantly rural and agricultural in nature.

Very little of the landscape was not utilised, and in some areas such as the ‘Champion’ (from the French champ- for field) landscapes of the Midlands, almost every inch was turned over to arable- especially in the boom years of population expanse during the 13th century.

In Sherwood Forest it was similar, in that almost every resource was used.

Every village had its great open fields, where crops were rotated through the season, and the people farmed strips of land spread throughout them. Each year one field stood fallow to recover for the following years crops.

This fallow field was fertilized by the animals of the village. Pigs and sheep would be concentrated at night into temporary pens to ‘focus’ their fertilization efforts.

Between these times it was necessary to graze animals away from the open fields.

No matter how much an animal fertilizes a field it will always take more nutrients than it returns, if it grazes exclusively from the same field that it fertilizes, as it requires nutrients to grow.

An external source of nutrients and energy was therefore required, and in Sherwood Forest this came from the vast areas of wood-pasture and wooded commons, and the great heaths and Lings. 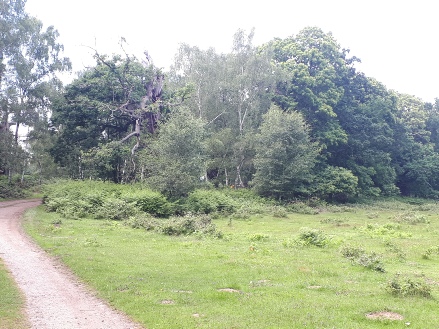 According to the Ancient Tree Forum, ‘A wood pasture is an area of grazing land with trees’. https://www.ancienttreeforum.co.uk/ancient-trees/british-treescapes/wood-pastures/.

These wooded areas or ‘treed’ landscapes were open to grazing and browsing animals including livestock and wild animals such as deer.

This form of land use was common at the time of Domesday Book (1086) where it is referred to as ‘silva pastilis’- meaning ‘wood pasture’. This is the only type of woodland mentioned in Sherwood Forest at this time. In other regions the term ‘silva minuta’ referring to woodland managed as underwood or coppice (see below for the development of coppice woodland from this wood-pasture).

The crown woods of Birklands and Bilhaugh covered many miles and were wood-pasture. The veteran oak tree of the Sherwood National Nature Reserve are remnants of this type of land use.

Heath land was a prominent landform element according to the old maps and documents.

Heaths are areas of uncultivated or un-tilled land or wasteland- the word comes from the Old English ‘hæð’ and cognate Old Norse ‘heiðr’.

Sherwood Forest has at Budby South Forest the largest area of lowland heath in the East Midlands.

They have a common Germanic root- the modern day German word for heath is ‘Heide’.

Heaths are commonly home to an number of species the most common being heather known by the Latin name Calluna.

The name for heather seems to come from its growing on heath, but etymologists are not sure. However the German word for Heather is  ‘Heidekraut’ meaning literally ‘heath herb’.

The area of Sherwood Forest which sits on the Sherwood Sandstone Geology was once known as the Hatfield District.

This was the western division of the Wapentake of Bassetlaw.

This Hatfield district may have been the fossilisation of a far earlier Anglo-Saxon age regio or sub-kingdom, known as ‘Haethfelthland’ (see Endwinstowe church survey and the Battle of Hatfield Investigations entries).

So it is clear that heath land was an important constituent of the landscape to very early times. It may have developed following Roman clearances for field systems, but it may be remnant from clearances beginning from the Mesolithic and Neolithic periods.

These clearances may have started by opening out some of the larger areas of grazed clearances caused naturally by browsing animals in a ‘Francis Vera’ style savanna type setting, but having been turned into wood-pasture by early farmers, they became victims of over-grazing.

Many of the heaths present by medieval times may have been originally wood-pasture, but subject to over-grazing, limiting the re-growth of timber.

They could simply be pastures where heather predominates and there are less trees, whereas many of the wood-pastures or woods were open grazed areas where trees were more dominant. The latter opening out seamlessly onto the former.

These ideas are the subject of on-going research as part of the Sherwood Forest Archaeology Project.

One thing is certain is that heath land was a significant feature in the Sherwood Forest landscape by Medieval times.

In Sherwood Forest in medieval times these areas were often known as ‘Lyngges’ - there are numerous spellings. The modern day version is ‘Ling’.

The name Ling comes from the Old Scandinavian for ‘heather’, and is a legacy of Viking incursions, and subsequent Danish settlement in the landscape from the 9th to 11th centuries.

In modern day Scandinavia the word still survives as the Danish, Norwegian, and Icelandic languages word ‘Lyng’.  In Sweden the word is ‘Ljung’. 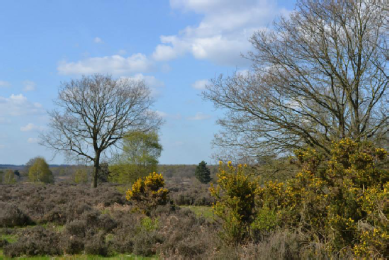 It was these large areas of open ‘chase’ that enabled deer hunting and attracted the Kings to make this landscape into a Forest or hunting reserve.

For the common person they had a different use. Shepherds and swineherds would tend their flocks and herds on these vast swathes of wooded pasture land and lowland heath, around Sherwood Forest that stretched for mile after mile across the open countryside.

Vast areas such as ‘Basforde Lyngges’, the heaths of Rufford Abbey Lordship, ‘Budby Oute Fieldes’ and the ‘Moor of Kirby’, would be dotted with these herds, and the sight of flocks and shepherds would have been common to the traveller passing through the forest.

Cattle would have been grazed along with swine and sheep in the wooded commons such as Calverton Common.

Each parish had their own areas of woodland, usually at their edges.

In Domesday all these area are recorded as wood-pasture (open to grazing livestock (and deer) with no boundary hedges).

In the more populated southern ‘Thorneywood’ area they occupied the high ground between parishes, such as on the ridges between the villages of Lambley, Woodborough and Calverton.

During the 12th and 13th century population increase and pressure on resources resulted in a more intensive harvesting and control of woodland in the form of coppicing.

A coppice was a wood where trees were chopped down at the base, which resulted in re-growth of many long thin branches which could then be harvested repeatedly ove r the years as required.

Here the woods were enclosed and access to livestock was controlled or denied (animals were prevented from accessing a coppice following a period of felling to allow re-growth).

This naming and division of wooded commons and woodpasture into separate woods was happening on such a scale that the Statutes of Merton in 1235 resulted in the Charter of Commons defining how land should be divided. It permitted landlords to enclose common pasture provided enough common access was available to peasants in line with their ancient customs.

The King had already enclosed large area within Sherwood Forest in his ‘Hays’ (enclosures- which included Birklands and Bilhaugh, Linby Hay and Bestwood).

The result was that the landscape became more formalised and compartmentalised.

In the southern part of the Forest in Thorneywood Chase, the wooded commons took on the form of a compartmentalised wooded Forest, where although the woodlands joined together to form giant woods that could cover miles, they each had names reflecting to whom they belonged. Carleton Wode, Gedling Wode, Basforde Wode (named after villages) Kettulbarne Haw, Fox Swaht, Prior Stobyn, Samson Wode (after landscape features or owners past and present).

They were also enclosed behind banks and hedges, and operated as coppice woods.

In the ‘High Forest’, (the northern part of Sherwood Forest) some of these woods were vast such as the great Maunsfelde (Mansfield) Wode, Sutton Wode, Blidworth Wood and Hay Wode, as well as the great crown woods of the Hay of Birklands, Bilhaugh and Lyndhurst Wood.

Despite this enclosing of the former woodpasture commons (some did survive) the rights to the woods were heavily guarded by the people, because they had other kinds of rights within them.

As well as the rights to pasture on the great heaths and commons peasants had the right to graze their animals in woodland at certain times of the year.

One such time was the ‘Pannage’ season (just after the acorns fell) when peasant could graze their pigs on acorns in the woods of the Forest.

These rights to access to woods were strictly controlled under Forest Law with ‘Agisters’ acting as tax collectors to control quotas and extract fines, the rights of Pasturage were discussed at the Swainmote Court which met 3 times a year. Before Fence month (15 days before the feast of St John (Midsummer ) on June 9 and either side of the Pannage Season (Michaelmas 29th September to Martinmas 11th November).

Peasants also had the right to take some smaller timber from the woods for ‘Haybote’ (hedge repair) and ‘Husbote’ (house repair).

These rights were often jealously guarded!

‘The King’s tenants of his manor of Clypston in Shirwod (Sherwood), which is of ancient demesne of the crown of England, and their ancestors, tenants of the same manor, from time immemorial have been accustomed to have all ferns growing in a place which is now called the park of Clypston, for thirteen shillings and six pence, to be rendered yearly to the King’s ancestors by the hands of the justice of the Forest; and to collect the leaves fallen from the trees in the same place for manuring their lands, without rendering anything therefor; and to have pasture for all kinds of beasts in the same, doing in return the custody of the vert and venison in the same place by two of the tenants’.

This shows how the peasants had customary rights to access the ‘park’ for livestock grazing, and to gather ferns and leaves for fertilizer, (in exchange for looking after the deer and timber for the King)

It also shows that they were empowered enough to appeal through the court system to protect those rights.

The reason for the inquest is that Edward II had closed off access to the park, preventing them from their customary rights. The newly crowned Edward III was being petitioned by the men of Clipstone to have their rights returned. They also informed the King that he was losing the money they would normally pay for their rights!!!

Presumably he would be more likely to listen if his wallet was affected.

The men also pointed out that they could not get sufficient pasture outside of the park for their needs- as stated earlier nutrients for flocks and open fields needed to come from somewhere other than the fields themselves.

So as can be seen the landscape of Sherwood Forest provided opportunities for people to make their living from agriculture and from accessing the resources that the Forest provided around them. It was also the case that people would guard these rights vigorously, petitioning through the courts and to the legal system.

The laws of the land prevented many people from having many things, but they also enshrined rights over generations and the law could be called upon to protect those rights if they were threatened.