Medieval Sherwood Forest was a landscape of woodland, heathland, towns and villages.

It was an ideal location for a Royal Forest because it was underlain for the most part by sandstone bedrock (see why Sherwood Page for more details on the location of Sherwood).

There were other rocks underlying the forest including the Magnesian Limestones group and the Mercia Mustones. But the forest sat predominantly on the group of sandstones laid down in the Triassic Period 250-200 million years ago. 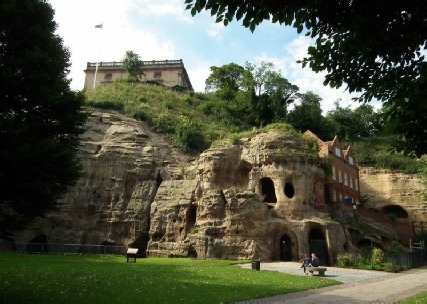 They were formed as flash-flood deposits in desert basins, with pebble-beds of quartzite stones and flakes concentrated into thin layers of conglomerates reflecting these storm events. Depostional layers are clearly seen, as is the direction of deposition. They were originally known as the ‘Bunter Pebble Beds’ because of these horizons in the rock.

They were however renamed the ‘Sherwood Sandstones’ because of their link to the medieval forest.

The sandstones were highly permeable, resulting in leaching of nutrients from the over lying soils. The result was that this landscape was less suitable for arable in the medieval period, than the surrounding geologies and so maintained a relatively higher amount of woodland and lowland heath (see why Sherwood page)

Ideal for deer and hunting.

Another property of the Sherwood Sandstones was that they could be dug into using hand tools. The sandstone were relatively week and friable (easily scraped away)  but thanks to a clay cement they could be shaped into self-supporting caves, with stable roof spans.

As a result Nottingham, but also to a lesser extent Mansfield (rock houses) had an incredible array of rock-cut caves used for domestic and commercial purposes in the medieval period.

Some of the caves of Nottingham and their use in the medieval period will be discussed here. There are many many caves in Nottingham- in fact more than in any other town in the country, but many date to later times (see the City of Caves Exhibition) and these have been excavated by, and are currently under excavation by the Nottingham Historical and Archaeological Society.

In Medieval times there were many caves in Nottingham- almost all of them were located within the limits of the medieval town- between the castle in the west and the later Lace Market area in the east, and the 'Backside' (currenty day Upper Parliament Street) in the north and the cliff face near Broad Marsh in the south. 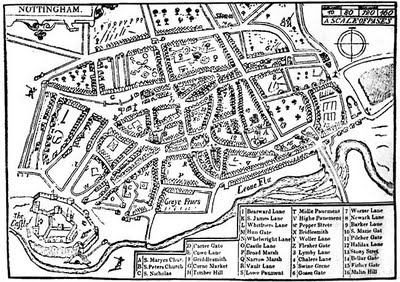 Further south of this the rock was beneath the water-table and saturated.

Many of the caves that may have existed in medieval times have either been re-worked in later times or removed as the cliff face became unstable and was cut back. There are some however that survive to this day to gives us an insight into subterranean life in medieval Nottingham.

Contrary to popular legend and myth the caves did not form tunnels down which Robin Hood avoided capture by the Sheriff of Nottingham- but their history is no less interesting for that.

They generally formed cellars under buildings- with a variety of forms.

Brewing was a large industry during medieval times and some of the surviving caves are Maltkilns, where spherical rooms were carved into the sandstone with either a continuous ledge around the edge or notches cut to support beams to hold the grain which was roasted from charcoal fires beneath (Waltham 2008).

Booze and boozing has always been popular in England and it was no different in medieval Sherwood Forest where as well as a legitimate brewing industry, demand must have out-stripped supply, as a large number of people are recorded as ‘brewing against the assize’ (either selling over price or without licence) in the Micketorn Jury Presentments for the 14th century.

Another major industry in Sherwood Forest was tanning  (turning raw animal hide into leather).  The oak bark from the forest provided a perfect ingredient for the process- as did the urine from the town folk of Nottingham and other odure used in the process.

A number of tanners are listed in the Nottingham Borough records and other sources, including a Willelmo le Tanur (William the Tanner) from 1222-23 in the Rufford Charters (see Rufford Charters: landscape, people, trades and lives in Sherwood Forest entry for more details).

Evidence of the use of oak bark in the industry is still preserved in the name ‘Barker Gate’ a street in the later Lace Market area of the old town- the old English Quarter (see Medieval Nottingham entry).

In the presentments of the Mickeltorn Jury for 1395 it is claimed that:

‘the tanners (tannarii) of Nottingham sell leather not well tanned, and that each of them sells leather in his house without the view of the market or being placed in the market for sale.’

The tannery caves of Nottingham were located to the southern side of town and were cut into the base of the cliff. 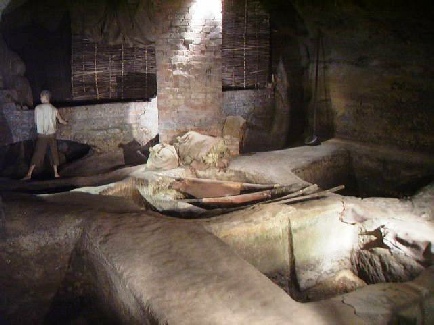 The process used vats cut into the bedrock to allow fluids for different parts of the process to be held.

They are the only underground tanneries in Britain and must have stunk to high heaven!

In  the 1395 Mickeltorn Jury presentments it is later stated that the ‘tanners dwelling in Littlemerche (Littlemarsh) of Nottingham on the southern side block up the common water which is called Lene with stakes, poles and turves in time, and lay their leather in the aforesaid water'.

Tanners along with dyers and fullers were commonly in trouble with this court as the people of Nottingham complained about the smells and ‘odure’ associated with their trades.

This relationship, however uneasy, had a long history and was also in existence in the 13th century and earlier:

Caves were also used as dwelling places, possibly around the base of Castle Rock, and on the main holloway road ways into the town (Derby Road and Hollowstone)- unfortunately any medieval caves along these roads are now destroyed- later ones however still line the sides of Hollowstone which was the main thoroughfare into the town from the south in medieval times.

Maybe one of these caves provided shelter for William Leech and Thomas Kay who ‘unjustly occupied the King’s Highway under the cemetery of the Church of the Blessed Mary’ in 1395.

Cellars were used for the storage of wool and other commodities (Waltham 2008) a number of occurrences of these being left open to the road are recorded including a William Dalahowe who ‘holds a cellar open at the corner towards mothalgate (moot hall gate) to the serious detriment of the town'  also in 1395.

Alongside these caves that were part of the everyday life of the townscape of Nottingham there were a number of larger caves in the rock under Nottingham Castle that were involved in events of national importance.

One of the most famous caves cut within the rock is known as 'King Davids Dungeon' and may have held King David II of Scotland in the 14th century.

The most famous cave in Nottingham is Mortimers Hole- a tunnel which provides access to the castle from the breweries and mills on the south side of the base of the cliffs, up to the castle bailey above.  It enters the rock to the west of 'Ye Olde Trip to Jerusalem Pub' which has rock-cut cave rooms inside, and claims to be the oldest pub in England.

It was through this tunnel that Edward III’s men broke into Nottingham Castle in 1334 and captured the usurper Roger Mortimer- who with his lover Queen Isabella (wife of Edward II) had seized the throne in 1327. Edward II had supposedly died with a red hot poker up his 'rear-end' in Berkeley Castle, and now Edward III retook the throne for himself via this tunnel.

All in Nottingham Castle in medieval Sherwood Forest.

The caves of Nottingham then, were an intrinsic part of day to day life in the heart of medieval Sherwood Forest, and as well as giving us a glimpse into how people lived their lives they also sometimes played their part in the lives of the great and good, and on the lives of the people of medieval England as a whole.

The caves of Nottingham, are one of the lesser known secrets of Nottingham and Sherwood Forest, and hopefully with these new archaeological projects and potential redevelopment as a bigger tourist attraction their history will become known to a wider audience.

The Caves of Medieval Sherwood Forest