The Butcher, the Bacon and Bestwood: The importance of Pigs in medieval Sherwood Forest.

In medieval Sherwood Forest one of the common rights held by local people was the right to graze pigs in woodlands, during the period when the acorns fell in the autumn.

This right was known as Pannage.

Running up to this period the pigs had grazed first on the heaths, and then on the stubbs of the open fields following the harvests of August and early September.

Pannage then followed where Pigs could enter the woods to feast on the acorns (in other Forests Beech Mast was also on the menu, but in Sherwood the oak was prevalent). 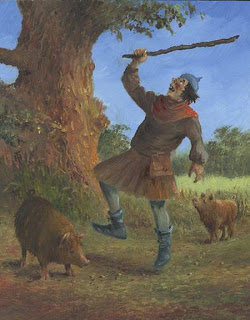 Picture: A peasant beating acorns from the tree for his pigs

Following Pannage the pigs were slaughtered for the table with a few being kept over-winter to maintain the herd.

This slaughter is probably what lead to the Anglo-Saxon name for the moon, or month of November - ‘Blodmonath’ - the Blood Moon, due to the scale of slaughter seen in that season.

Pannaging pigs was an important part of rural life in the Forest.

Acorns were a great source of nutrition for pigs, which helped in their fattening prior to slaughter.

Pigs by eating these acorns not only grew fat, they also served a purpose of helping to remove excess acorns from the forest floor which might otherwise poison grazing ruminants such as cattle, horses and sheep.

Humans can eat corns but need to wash away this chemical from the acorns.

Cattle, sheep and horses do not have the luxury of pre-preparing food and can become ill from over consumption.

This can be increased in years when there are a large number of acorns.

Squirrels, Jays and deer naturally feed on acorns. If an oak tree produced the same number of acorn every year then all the acorns would be eaten by these predators.

The oak seems to have evolved a process where these predator numbers are controlled through producing a heavy crop of acorns during a ‘mast’ year, once every few years. The three or fours ‘leen’ years in between control the predator numbers, who then cannot eat all the acorns in a mast year.

That way acorns survive from the mast year to grow into oak trees!

One problem from a mast year can be over -grazing on the abundant acorns which causes illness through tannin poisoning in cattle, horses and sheep.

This does not seem to affect pigs. Therefore these ‘greedy pigs’ help out these other animals by removing the acorns from the forest floor, thus providing an important service for farmers grazing livestock in the woods.

So the pig was intrinsic to agricultural life in the forest, and the pannage season was the key season in this agricultural cycle.

The keepers of Sherwood Forest actually had the right to keep their pigs in the wood longer than everyone else, and they enjoyed an extra month fattening their pigs in an additional right known as ‘After Pannage’ which came as a perk of the job.

This right was listed in an Inquisition Post Mortem for the keeper of Sherwood Forest Robert Everningham, following his death.

Pannage is a custom still observed to this day in the New Forest in Hampshire, and was once prevalent all across medieval England, surviving longer in forested areas.

There are many references to pigs in the landscape of Sherwood Forst. In medieval times including a 29 acres enclosure known as ‘swincote hill’ (the pig house hill) in the crown manor of Clipstone, which formed part of the designed landscape there, around the Kings royal hunting palace.

In Newstead near the Priory was a ‘Swine sti’ or ‘pig road’.

Also the road way (which originally passed from Edwinstowe northwards through the Kings woodland of Bilhaugh) which is now the road to the Sherwood Forest National Nature Reserve and Visitor Centre, is known as ‘Swinecote Road’.

So even to this day visitors who come from all over the world, follow the same track way once used by villagers pannaging their pigs in the ancient woodlands of Sherwood Forest.

The medieval landscape is still there to see if you know how to look.

Of course leaving your pigs in woodland could be hazardous.

As one excerpt from the Nottingham Court Rolls attests:

The local people had left their pigs in Bestwood park, and they were grazing there legitimately under the pannage system.

The towns folk were expecting their pigs to quietly much away on acorns, but someone had a different idea…

On January 16th 1440, an 'action by Ralph, Lord Cromwell’ was brought before the Nottingham Court, ‘for breach of Bestwood Park', following an incident there invlving breaking and entering and a case of ‘pig-napping’:

“Radulphus, Dominus de Crumwell, myles (Ralph Lord of Cromwell, knight), complains of William Fisher, of Nottingham, butcher, in a plea of trespass against the peace of our lord the present King...

...And whereupon he says, by his attornies William Alwin and John Morton, that the aforesaid William, together with others, on Tursday next after the feast of All Hallows, in the 19th year of the reign of king Henry VI, here at Nottingham, with force and arms, to wit, with a club, drove four hogs (porcos) put and arrested for pannage within the Park of Bestwood out of the park aforesaid, and broke the park aforesaid... to the cost of 20s...”

William presented himself to the court to show he was innocent...

William Fisher, and others, of Nottingham were accused of breaking into the park with clubs and stealing four pigs! 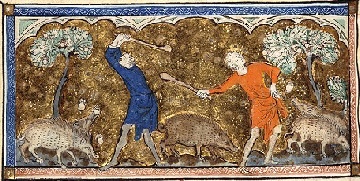 The Keeper of the Forest here brought complaint before the Nottingham Court to gain the money back from the accused, caused by the trespass and damage to the park.

Ralph Cromwell was Keeper of Sherwood Forest and Constable of Nottingham Castle as appointed by King Henry VI in 1437. He held land and a manor house at Lambley- and may also have been the man for whom the Belvoir Map of Sherwood Forest was made.

Unfortunately there is no follow up to the case, so it is not certain of the outcome of the trial.

What is strange is that this is not poaching in the normal sense.

These are not the Kings deer, and the butcher was not hunting with a bow.

He went in to the park, broke the park pale (three metre high fence) down, and stole four pigs who were grazing within - using a club.

Clearly Bacon was not easy to come by for his butchers shop at that time!!!