One of the most important sources to the Landscape Archaeologist investigating the landscape of Medieval Sherwood Forest is the 1609 crown survey and map by Richard Bankes. 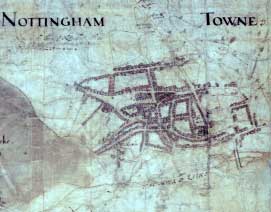 This survey was commissioned for the newly crowned James I, and undertaken by the surveyor Richard Bankes in, or just before 1609.

It consists of a written survey of all the freehold land within the forest, and an accompanying map.

The map for the southern section of Sherwood Forest- known as 'Thorneywood' survives- unfortunately the maps for the 'High Forest' to the north and that for the area known as 'Rumwood' are now lost.

It is the earliest cartographically accurate depiction of the landscape of the forest, and unlike the earlier 'Belvoir map' depicts fields, roads, villages and rivers in a manner familiar to the modern reader.

It also lists all the occupiers of land within the forest boundary (these people will be listed in various entries to come soon).

The map and survey are of huge importance for understanding the landscape and administration of the forest at the end of the medieval period- they catch a snap-shot of the landscape at a time when royal influence was beginning to dwindle, as powerful landlords came to dominate the area in the 17th century.

The Civil War of 1642-51 would dramatically alter the power structure of the forest.

It would also see vast areas of woodland cut down to fuel the war effort, and due to the collapse of Forest Administration at that time.

The dissolution of the monasteries in the 16th century had altered land ownership with many powerful magnates occupying land previously in Monastic hands.

This process would mature in the 17th century, where men like the Earl of Newcastle took over the great royal manor of Mansfield and many of the royal centres in the forest.

He would become both Keeper of Sherwood Forest and Justice in Eyre for the Forests North of the Trent at the same time. As well as the major landholder in the 'High Forest'.

So this map and survey is significant as it gives us a window into the forest as it was before these major changes.

It is also useful as a stepping-stone back to far older times- and combined with historic documents and other sources has formed the background of the Map of medieval Sherwood Forest created by Alan McCormick and Andy Gaunt.

In many other parts of the country 15th and 16th century enclosure of the great open fields altered the landscape- masking to an extent the earlier shape of things.

This was recorded in a survey from the 16th century known as the Domesday of Enclosures for Nottinghamshire.

The Forest Law seems to have lessened the impact of these enclosures on Sherwood Forest than in other areas.

This means that the 1609 survey offers a better view than would be the case for a non-forest area.

The 1609 crown survey then, offers a fantastic view of the late Medieval landscape.

It also offers a chance for Landscape Archaeologists and Historians to rebuild the Earlier landscape of Medieval Sherwood Forest.

The maps were redrawn by Peter Burgess, and the survey was edited by Steph Mastoris and Sue Groves in 1998 for the Thoroton Society (see bibliography).