Sherwood Forest in medieval times was an area of land subject to Forest Law.

The Forest Law protected Beasts of the chase (primarily deer) from being hunted, by anyone except the king unless he gave them permission.

The first surviving legal texts relating to the forest laws come from 1100. This is at the very start of the reign of Henry I

Carrying of bows and spears in the forest

The hambling of dogs

Discovery of hide or flesh

*Hambling of dogs meant the removal of claws to prevent the dog from hunting.

In Sherwood Forest the Keepership of the Forest was hereditary.

Foresters had the power to arrest people for infringements on the forest law. They patrolled the forest on horseback and on foot.

There were a number of courts in the forest these included a small fines court - ‘The Attachment Court’ responsible for the day to day running of the forest.

The Attachment court was where judgment was passed on small cases of trespass on the vert (literally the ‘greenery’ - damage to, or illegal chopping down of timber trees) and fines were issued.

The Attachment court officials were known as ‘Verderers’.

The largest and most serious court of the Forest was known as the ‘Forest Eyre Court”This was a major affair and was held less frequently than the aforementioned Attachment court.

The Forest Eyres Courts oversaw the exacting of justice on larger and more serious breaches.

These included poaching, as well as larger breaches against the vert (literally the greenery - ie chopping down timber).

The Forest Eyres were attended by itinerant justices, who were sent around the country from Westminster to ensure forest Law was upheld correctly in the Shires.

This is where the name ‘Eyre’ comes from: it is a Middle English term derived from the Old French word ‘eire’, which itself comes from Latin word ’iter’ meaning ‘journey’.
(from ‘A Law Dictionary: Or the Interpreter of Words and Terms: Used ... in the Common Or Statute Laws ... with an Appendix Containing ... the Antient Names of Places ... and ... Surnames …’‘ (Cowell, 1772))

In other words the court judges were itinerant and the court ‘journeyed’ around the country.

The courts were often named after the justices themselves,

So the 1187 forest Eyre was known as the Eyre of Geoffrey Fitzpeter.

The Eyre dealt with extracting fines and levies from larger breaches of the Forest law.

The records for two of Sherwood Forests Eyre Courts survive in full. These are for 1287 and 1334.

There were two jurisdictions for the justices in Eyre for the country- one for south of the River Trent known as 'this side Trent' and one for the north known as 'Yon side Trent'. (An element of southern bias here!).

The Forest Eyre for Sherwood Forest was therefore administered by 'the Kings Justices in Eyre Yon side Trent'.

In 1334 The Pleas of the Forest of Sherwood were heard by Ralph De Neville, Richard of Aldborough, and Peter of Middleton, at Nottingham on 'the Monday next after the Feast of St George (23rd April) in the Eighth Year of the reign of King Edward, the Third after the Conquest'. 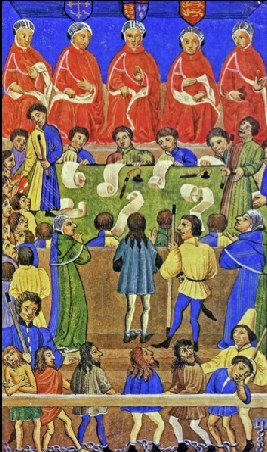 Picture: A medieval court in session

The court opened with the usual ceremony:

Following this royal and court protocol the Justices of Eyre are presented, and confirmation is made that the following is an exact record of the occurrences of the court.

The first trial before the court is of Hugh of Wotehale, William Hyend , Wilcock and Stephen Fleming of Nottingham who took a Hart in the Forest. A case of poaching:

It is presented and proved… that Hugh of Wotehale of Woodborough, William Hynde, Wilcock, formerly the servant of the parson of Clifton and Stephen Flemming of Nottingham on the Thursday…

…were in the wood of Arnold, in the place that is called Throwys, with bows and arrows… they shot a Hart so that it died… And its flesh was found putrid and devoured by vermin… and the arrow was found in the said Hart…

…the aforesaid Stephen is dead; therefore nothing of him…

…And the aforesaid William and Wilcock are not found… were exacted in the county and did not appear; therefore they are outlawed... (Turner 1901)

*A Hart is a male Red Deer.

The incident probably occurred under the cover of darkness which is why the poachers lost the carcass which became ‘putrid and devoured by vermin’ - a regular problem for night-time poachers.

The next entry recalls an inquiry made in 1288 by Edward I under his then Chief Forester William de Vescy.

This inquiry was into the previous rights of the then deceased Robert D'Everingham when he was formerly Keeper of Sherwood Forest.

Robert D'Everingham was stripped of his rights and position of keeper of the forest and imprisoned in Nottingham Castle at the 1287 Forest Eyre following indiscretions in the Forest.

He was dead within a year - so probably died in custody.

His family had been keepers of the forest back through marriage for hundreds of years.

The Eyre lists all his rights as keeper of the forest including the right to hunt cat and squirrel in the forest.

This inquiry was to see what rights he had had that could now be bestowed by the king on the next keeper of the Forest- no longer a hereditary right.

Besides these two entries regarding outlaws and crimes of hunting, the Forest Eyre is from then on a list of all the misdemeanours in Sherwood Forest since the last Eyre. The people listed below had all committed 'trespass against the vert' at a value greater than 6d.

Values lower than this were the responsibility of the smaller ‘Attachment courts'.

The following pleas were heard before the court:

Ralph son of Reynold of Edwinstowe for 1 oak 10d. His ‘plegii’ (pledges) were Richard of Normanton and Richard Godard of Thoresby. ‘Pro transgressione in misericordia nunc in itinere’ (for the trespass, he is now at the mercy of the Eyre).

Reynold the son of Geoffrey of Thoresby ‘una stobe’ (1 stub) at 8d.

Radulfo Molendinario (Ralph the miller) of Sutton (in Ashfield) ‘pro trescentum lattarum’ (for 300 laths (thin strips of wood - presumably for walling)) a 12d.

Hugone ad Pontem (Hugh of the Bridge) of the same town ‘pro stoches’ (for stocks) of the price of 8d.

Ricardo filio Galfridi filii Iuonis (Richard son of Geoffrey the son of Ives) of the same town ‘pro cheueronibus’ for chevrons of the price of 10d.

Nicholas Payne of Warsop for ‘uno ramo’(one branch) at the price of 6d.

Iohanne filio Willelmi de Thoure (John the son of William of Thoure) for a ‘quercu viride’ ( green oak) of the price of 18d.

Gilbert Fadir and Gilbert Gilling ‘pro melle asportato de bosco’ for honey carried away from the wood, of the price of sixpence

Thomas Sheth of Mansfield for a ‘domo vendita’ (house sold).

After listing these men and their crimes (some of them fairly petty eg. Nicholas Payne; one branch) the Erye Court then goes on to extract fines from the Verderers of the Attachment Court (see Forest Law Page) for failing to produce the rolls for their courts at Lindby, Bulwell, Calverton, Mansfield and Edwinstowe, for the years 1287 to 1289.

Does this suggest a level of corruption amongst these court officials- taking the money and evidence from the smaller courts of the forest and failing to declare them?

The Forest Eyre then, dealt with the crimes against the Venison, and by important men of the region such as Robert D’Everingham former Keeper of Sherwood Forest. It also kept the smaller courts and their officials in check.

It also seems to have dealt with the larger transgressions (more than 6d) against the Vert.

The court rolls show us the names of those involved and the places they have come from, and it certainly seems that many of the crimes described are committed by people trying to make a living in the forest- not by hardened criminals as might be expected.

These people are ordinary folk taking small amounts of timber, branches and sometimes even honey from the woods of Sherwood.

Why not have a look at the map below and see if you can find the names of places listed above including Budby, Calverton, Linby, Laxton, Warsop. Thoresby, Blidworth, Sutton in Ashfield, Mansfield, Edwinstowe, and many more… all places in Sherwood Forest to this day.