A Forest in medieval times was an area of land subject to Forest Law.

The Forest Law protected Beasts of the chase (primarily Deer) from being hunted, by anyone except the king unless he gave them permission.

The first surviving legal texts relating to the forest laws come from 1100.This is at the very start of the reign of Henry I

(Hambling of dogs meant the removal of claws to prevent the dog from hunting). 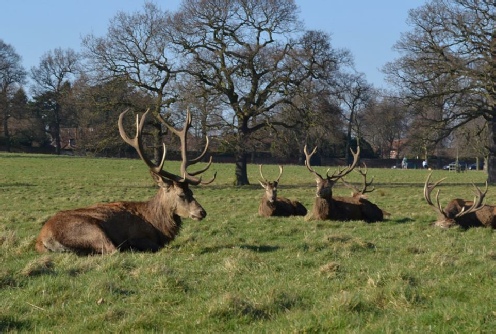 There were a number of courts in the forest these included

Small fines court - The Attachment Court responsible for the day to day running of the forest.

The attachment court was where judgment was passed on small cases of trespass on the vert and fines were issued.

The Attachment court officials were known as Verderers.

The Forest Eyres were attended by itinerant justices, and were often named after the justices themselves,

eg. 1187 forest Eyre was known as the Eyre of Geoffrey Fitzpeter.

The Eyre dealt with extracting fines and levies from larger breaches of the forest law.

Alongside the regular cycle of the court system was a more flexible court known as the court of Special Inquisition.

When hide of flesh was discovered there was an inquest in four neighbouring parishes to decide who was to blame.

Blinding and castration as a punishment for those who take deer or boar in the forest.

Mutilation and hanging were banned in the forest clauses of Magna Carta in 1215.

In Sherwood Forest the Keepersip of the Forest was hereditary.

Foresters had the power to arrest people for infringments on the forest law. They patrolled the forest on horseback and on foot.

The Battle of Hatfield